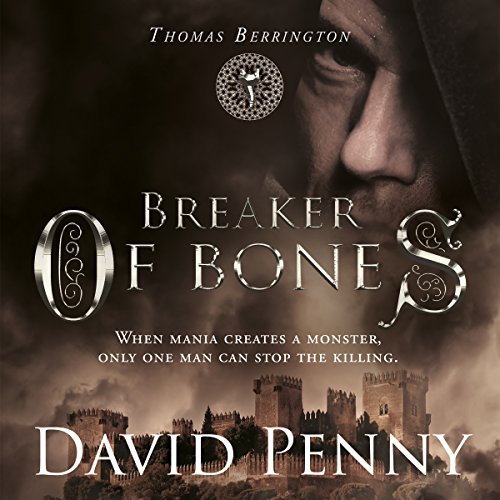 When mania creates a monster, only one man can stop the killing.

It is March 1483, and surgeon Thomas Berrington is making a reluctant journey to Qurtuba at the request of his master. He expects only to operate on a Spanish prince and return home to Moorish al-Andalus. But fate has something else in store for him and his companion, the eunuch Jorge.

A warped killer has been murdering young women and creating twisted creatures from their bodies. When Thomas is tasked by Queen Isabel to hunt down the culprit he is propelled into an unfamiliar world of religious mania where it is impossible to tell who is friend and who foe. Meanwhile Jorge is on a quest of his own - to track down the family he hasn't seen in almost 20 years.

When Jorge's newfound niece is chosen as the Bonebreaker's next victim the pair are faced with their most dangerous challenge yet. Thomas and Jorge race to expose the killer before yet another life is taken - this time that of someone closer to them.

Breaker of Bones is the stunning continuation of the Thomas Berrington saga set in the final years of Moorish al-Andalus.

I believe this is the second of the Thomas Berrington books, and I will certainly continue to read them. I am familiar with the Reconquest in Spain and truly enjoy the author's bringing it to life with characters whose complexity is a joy, good plots and plenty of historical detail.

This is the second I’ve read in the series. While there is action it is interspersed with long periods of self contemplation. The violence was probably accurate to the storyline the gratuitous sex slowed the plot instead of contributing to it. I won’t be reading any more in the series as I found author Mel Starr and his excellent series set in a similar time period (The Unquiet Bones is wonderful)