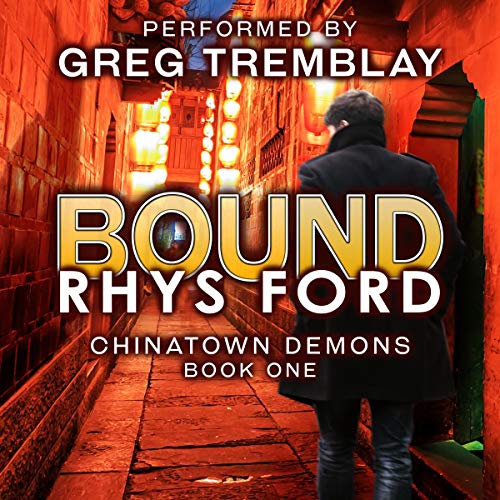 A different place - another time - and where the city’s streets keep secrets and shadowy mysteries, SFPD Inspector Spencer Ricci needs to dig through after he finds himself on a case involving a dismembered, mummified man in a restaurant’s locked storage room.

Spencer drags around a lot of baggage, including an ongoing battle with the bottle and a long career as an LAPD detective he’d set fire to in a blaze of booze-soaked mistakes. San Francisco is supposed to be a new start, but his old ghosts haunt him, beckoning him back into his self-destructive bad habits. Bad habits that include contemplating doing dirty things with the wrong kind of guy and this time, it’s a sleek, cold-tempered medical examiner named Xian Carter with a complicated reputation.

For a century-old demon, Xian Carter is content with his secretive life. Hiding his nature from the mundane world, he blends in with the city’s inhabitants as best he can but even the best of predators make mistakes. Delving into the mysteries of the dead provide a welcome distraction from endless nights and hiding in plain sight amuses him, until something supernaturally wicked comes knocking on his door with an extremely hot, broody Inspector close behind.

Murder makes for strange bedfellows and this one is no exception. The twists and turns of the case leaves Xian and Spencer on a wild goose chase after clues, but Xian can only hope there’s a human at the end of the trail - because the last thing San Francisco needs is another predator.

How do I review this? It is NOT a full book

I’m annoyed at Ford for doing what she did. This could have been an absolutely fantastic book. I love her Kai Gracen & Cole McGinnis series. I was prepared to love Chinatown Demons. And the horrible part? I did love the part of the book that was there. However, this WAS NOT A BOOK. This was one of those horrible things some authors do where they write a book, separate it into small pieces, and then sell each piece, calling it a book. And what a rip off. Leaving us without finishing the story. I have no clue how many pieces Ford cut this book up into, but I won’t be wasting anymore money on it unless she puts the whole SERIES together in one book.

Tremblay was off his game with this one. There were so many spots where two characters were talking (the most notable being Carter and his brother) where i had NO clue who was speaking because their voices were too similar.

So a big thumbs down on this one. And I’m mad because I like the way Ford writes. Usually her books are complete. This was a complete farce. It’s like we reached the end of the first act of the story and that’s where Bound ended.

If she wanted to write a piecemeal story, she should have put that in the book info... though the info written there was far too much for how tiny this few chapters was. Bad, bad, bad.

This book simply breaks off abruptly in an ending so sudden I’m not even sure it can be called a “cliffhanger.” The book just stops. Considering its short length, the author is merely selling a few chapters of a book as a book. I imagine Rhys Ford intends to sell the novel in pieces to enhance her profit. But, it should have been marketed as a piece of a longer work. So, don’t waste your money. Greg Tremblay does an excellent job as always but too bad his talent was wasted on this.

The world-building was exciting. The characters were interesting and likable. I wish some of the reader's questions were answered. That said, I hate, hate, hate undisclosed cliffhangers; particularly when I don't know when the story will continue. Rhys Ford is normally a must-read for me but I feel mislead. Book One implies a series, not a serial. Bound was priced and sold as a book, not as a portion of one. Greg Tremblay performed the story very well but I had a hard time distinguishing the two brothers from each other.

What the ever-loving what!?

I was so confused when it ended. I thought it was a glitch at first, but no! it's an incomplete story. not cool.

Not a full story!!

I am genuinely angry that I wasted hard earned money on what I had assumed was a short story, only to get a piece of a story. You get none of your questions answered at the end. Even more annoying is that even if I wanted to finish the story audible does not have the rest of the "series".

Waiting for the next one

Great beginning to a new series. I’m eagerly waiting for the next installment to this new series. Intriguing character and the story has me hooked.

The only fault with this book is that it is too short! I want more. Please bring on the next volume...I read the book a while back...then bought the audio...now I just need the story to continue! I want more about these intriguing characters. MORE PLEASE.

Surprise! My high expectations were met.

This is Rhys Ford bringing it! and Greg Tremblay swinging it!

Yes it seems short, and yes it could be described as a cliffhanger but in my humble opinion this can only be said about Bound because it is so good that we want more, much more.. A fan of these marvelous artists and their work (“Cole McGinnis, Murder and Mayhem, Hellsinger”, ), Bound just could be one of their best and I’m so looking forward to the rest…Thanks Audible..Gwen S.

This one is interesting and kept me engaged. I will want to listen or read the next instalment to find out what will happen. Whether or not this new series will be as good as other series Rhys has written is yet to be decided.