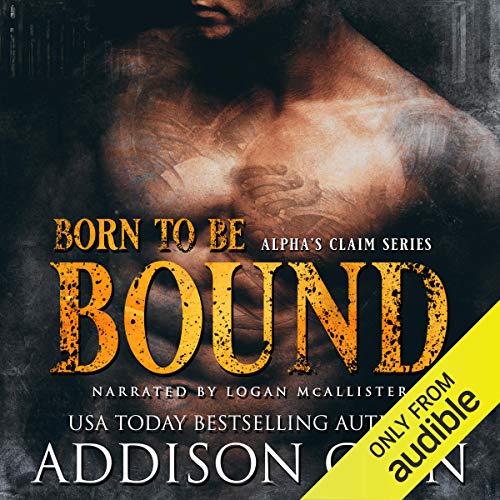 Born to be Bound

Born to be Bound

Every bit as ruthless as his reputation suggests....

Shepherd ravages both Claire and her conquered city, refusing to let either slip through his fingers. He steals Claire's innocence and future by forcing a pair-bond on the rare, unwilling Omega female.

Violent, calculating, and incapable of remorse, he demands his new mate's adoration. Her attention. Her body.

I love dark romances, but this is NOT a dark romance (which maybe is my fault for not researching throughly before requesting to listen.) Born to be Bound is probably one of few stories I listed too at 2x the speed to make it to the end. It ends on a cliffhanger, but I'm not interested enough in the plot or characters to move onto the next book.

Spoiler Alert:
The plot is about a tarrant named Shepard who has taken over leadership by force, and rescues an Omega named Claire from being raped to keep for himself. She's in heat, so Shepard takes her repeatedly to help her through her cycle, but Claire views this as rape. Not to mention he keeps her locked up in a room until she escapes, and finds her way to a male Beta who tries to help her, but due to her experience, she doesn't trust him, and leaves the safety of his home to travel back to the rest of the Omegas who are in hiding. When she returns to the Omegas, she is betrayed by her own kind for food, and returned back to Shepard. Shepard has the women who betrayed Claire hanged. He forces her to go back in heat by giving her drugs, and impregnates her. Through Claire's seclusion she starts to develop feelings for Shepard until another female alpha shows up, and he has sex with her in their room while Claire is locked in the bathroom. She feels betrayed, and helpless and slips into depression, Shepard is starting to exhibit signs of caring for Claire and takes her outside to see the sky (how generous) where she escapes again, and returns back to the Beta. The story ends here with a cliffhanger.

The sex scenes are descriptive, and some may consider them to be more forced seduction; however, there is no chemistry or romance between the H/h.

The world building was good, unique and but a little confusing.

I have no issues with the narration. Logan did a good job, but I did listen to the story at 2x the speed.

I received this audio in exchange for an honest review, and have to say this story was not for me.

This book was to dark for me. I am used to the H and H having some chemistry even though they may go through bad times before they get to the good. The narration was good but again i do not like books where the Hero cheats on the Heroine when they are in the next room. I am not putting the writing down because i think it is bad. The story just was not for me. I received this audio book free for an honest opinion.

Too Dark for Me!

I didn't realize this was a series and this book ended in a cliffhanger. I really don't like cliffhangers.

Though the book is very well written, it is just too dark a story for me. The "hero" , Shepherd, captures and basically I'm prisons the "heroine", Claire. He forces himself on her, manipulates her, uses her, scars her body, and does this all without any emotional feelings in evidence.

Claire is abused to the point that she literally feels like she has no reason to live. Then the book ends.

Ugh!! I give the author credit for making Claire's situation so emotionally wrenching and heartbreaking. I cried for her despair. The world building was interesting, but bleak. That pretty much describes how I felt as the book ended:.... bleak.

Not my idea of a good read, although I can see how others could enjoy the book for the realism of the emotions it provokes. It's just not my cup of tea.

I thought the narrator was quite good.

I was provided with a complimentary copy by the author/publisher in exchange for an unbiased review through Audiobook Boom.

im about to cry. this is disrespectful.

the narrator had no emotion sounded robotic. and why- WHY is this narrated by a man. this is an unusual story dark subject matter. i wanted to feel for the main character but couldnt because the story is spoken by man. how you gonna have a females violation- narrated by a man.

Let me begin with the fact that the narrator left a lot to be desired in this story. This story was not my kind of shifter story. The abuse and dark sexual details turned me off. the rest of the story although well developed was just too dark for me. I don't condone tyranny in any shape or form and that is what this book is all about. Shephard wanting everything his way and no one even his "mate" would get in his way. Claire, an Omega, is his mate and she is abused. Then to top all of this off there is a cliffhanger. I think if a mind is strong enough to create such a tale it is strong enough to end it and just allude to future events in the next book. Cliffhangers make me angry because most of the time the next book is not finished and you have to wait for the tale to move forward. This is not how I envision reading a book.

if you are into a really dark romance with a ultra alpha male.... look no further! This story is off the hook right from the beginning. I stayed up all night to finish this one. If you are known for triggers then this book is not for you. Addison Cain, you delivered on this gem!

It's hard to figure out how to describe this book. This is one of those stories you really like or really dislike. On the one hand it's creative and completely different from anything I have listened to recently. On the other hand it's twisted and dark in a way that crosses the line for me. When I say dark, I'm not talking about the good kind of dark, twisted roller coaster kind of romance. I really don't even consider it a romance/love story. It's a victim and the controlling tyrant who holds her against her will.

The title isn't a play on words. The female lead is an Omega and Born to be Bound to an Alpha. It may sound like a desirable thing to be, but the reality is much different. The next in the series is Born to be Broken. If the title is as literal as this one, listening to Claire being broken is not something I'm interested in. Was this story interesting? Overall, yes. Will I be continuing with the series? No. Is it a series I would recommend? No.

Be forewarned the story does end in a cliffhanger.

At this point I'm not even sure if they are human, shifter's, a slight combination, still evolving or just referring to themselves in this way in an apocalyptic world that is drastically changed from the world they knew. They talk about having wolf traits but nothing is ever clear. There was no chemistry between Claire and Shepherd. I felt sorry for Claire. Shepherd was just a Alphahole.

Most of the time no matter how dark, broody or an a**hole an Alpha is he has some redeeming qualities or softens and grows on you. That didn't happen here. I don't care what universe, world, apocalyptic whatever your in, if your in forcing a woman into a sexual relationship it is not sexy, hot or desirable. I know this type of thing happens frequently in paranormal books but it didn't work here. It was a forced abusive relationship in every way, he keeps her locked in a room and cheats on her on top of that, which all just wrong. So no…. just no.

Logan McAllister does a good job with the narration. He's a really good narrator. Although, I don't think this is the best example of his work. I have listened to several other books he has narrated that have been much better. His narration in this story seemed flat. Nice deep voice. Clearly spoken with a nice even pace. Good character voices. He was able to bring the characters and the story to life.

I was voluntarily provided this free review copy audiobook by the author, narrator or publisher.

Storyline is dark and cliffhanger. I didn't enjoy the narrator he sounds like a computer.
"This audiobook was provided by the author, narrator, or publisher at no cost in exchange for an unbiased review courtesy of Audiobook Blast."

Unpolished with a Cliffhanger

I was provided a free copy of this book from the author or narrator for a honest review. I regret giving poor reviews to books, but unfortunately, this one is on the receiving end.

First of all, the narrator was very monotone throughout the book and the production quality was not up to par with other Audible titles. Notably, the editing did not catch a throat-clear that was not written as part of the story. It might seem picky, but it's a short 5-hour book so I would imagine it would have had at least one listen-through before publishing.

About the book itself. The characters in the story are not fleshed out. We did get some backstory as the book progressed, but the overall character development was just not there. The main female character had moments of courage followed by bouts of complete uselessness. The book also jumps directly into sex scene after sex scene in which there's some sort of wolf or dog inspiration. There were times when I would just think to myself "who would find this appealing?". Overall, I am glad that the book was only 5 hours, as I was having my doubts less than an hour in. I stuck it out though, just to be rewarded with a cliffhanger. Not pleased.

When I started listening to this one I had high hopes. But then I realized how the narrator sounds so robotic in the beginning but I adapted to it. As I'm going on and on I want to know the story so bad till it is addictive!!! She was his mate. Cool he is alpha and hot it's gone be cool.
Wait ...this Mother$&&)$$ was fowl. Now I need to know how this shit turns out. The story is very intriguing and gripping. Honestly I did not plan on getting book two butttt now I need to know what happens. I'm going to get book two and see where it leads me. 😡😳😡😳😡😳😡😳😡. To the author: Good job because you sucked me in.

a story in a world you can’t let go

Like the first time: unsettling disturbing and so fascinatingly soulful, repulsive and captivating - the pure contradiction - everything total devastating and great!