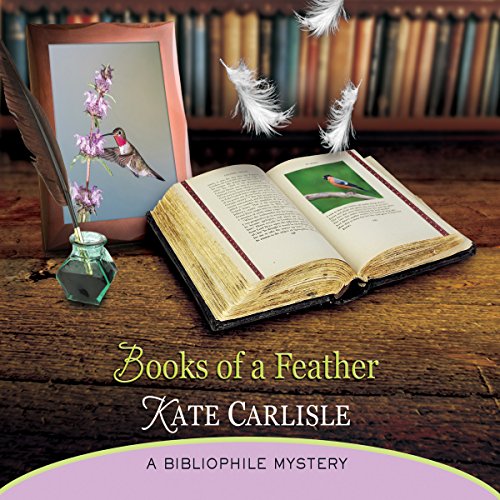 Books of a Feather

Books of a Feather

The Covington Library is hosting an exhibit featuring John James Audubon's Birds of America. During the gala celebrating the book, Brooklyn is approached by Jared Mulrooney, the president of the National Birdwatchers Society, who urgently needs Brooklyn's skilled hands to repair a less high-profile book of Audubon drawings that's fallen victim to spilled wine.

But everything runs afoul when Mulrooney is later discovered dead. Rumors fly about a motive for murder. Perhaps Mulrooney wanted to sink his claws into the pricey Audubon book, but Brooklyn believes the man died fighting off a daring thief. Soon danger circles Brooklyn's every move, and it's clear she must find answers before things really go south.

Another hit for Kate Carlisle who just keeps knocking them out of the park! Each book in the series has been a winner and this one is no exception. In fact, I think It's her best so far!

Another wonderful addition to this series! Love the characters! Look forward to more! Brooklyn and Derek are a great couple!

I'm a commuter so I listen to books all the time. I've listened to every book in this series. Some are not too bad. This was awful. I'm 1.5hrs into it and I know who did it and I'm already annoyed by the lack of growth in the characters. Same ol' story, people, everything. At some point it would be nice if the main character would get some self respect since she's so whiny and unbelieving that anyone would like her - again. This was rushed and just bad. I'm glad Amazon will refund my purchase. All done with the series.

This book was thoroughly entertaining. I can't wait for the next in the series. Perhaps Brooklyn and Derek's wedding mystery?

This was the best one ever!!!!!! While on vacation, I plan to listen to them all just to get back to this one.

Unbelievable dialog... just badly written all in all

I very rarely give up on a book, even if it's not to my liking. This book however was so bad I couldn't stand it... It's badly written in a clumsy language and the dialogs and main characters thoughts were terribly boring and unimaginative - sounded like a good story, but don't waste your money here!

I’m obsessed with binging on this series. True to the Cozy Mysteries Style, nearly no gore, no sex, a little light romance.
Charming fun.

I wonder when the trend to say, “either side” when people mean “both sides” or “each side” of something, will be over. It’s a pet peeve, because it can cause confusion when the reader isn’t familiar with the pretension.
She actually deviated in this book and said each side!

I’m glad Ms. Carlisle cranked out so many. I still have 3 more to go.

Please keep the series going. This series ‘A Bibliophile Mystery is one of the best yet. Kate Carlisle has done it again. Susie Bernie’s is an awesome narrator. Narrators can make or destroy audio book series. She does a great job.

Books of a Feather had a great fast moving plot and wonderful characters. It was well performed and enjoyable in every way. I will definitely get the next book in the series. In fact I can hardly wait to start it!

lovely storyline, enjoyed the story. it was well narrated it's brought what you would think is a boring career into a very exciting one