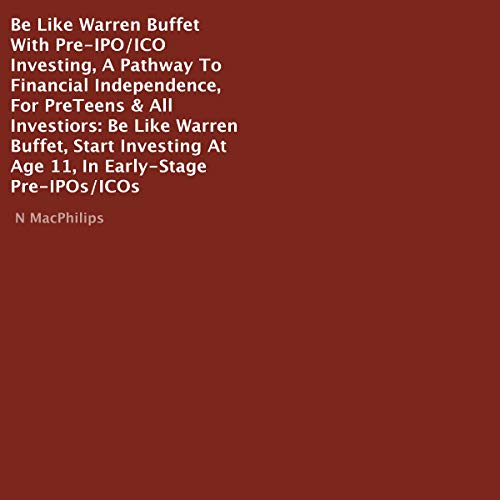 Be Like Warren Buffet with Pre-IPO/ICO Investing, a Pathway to Financial Independence, for Preteens & All Investiors

Warren Buffet started investing at the age of 11. Most people know who Warren Buffet is, whether they invest themselves or not. The third richest man in the world, Buffet's name has become synonymous with investing. But here's the thing.

The reason he was able to generate so much wealth is not just the fact that he made smart investment decisions, but more importantly that he was able to give his investments so much time to grow through the power of compounding returns.

It's an important lesson for every investor to learn: the earlier you start saving and investing, the more time you have to let compounding interest work in your favor.

"For over 60 years, I've been able to tap dance to work, doing what I love doing," Warren Buffett says in an HBO documentary slated to premiere at the end of the month. "I just feel very, very lucky." He says he "won the ovarian lottery".

Sure, luck certainly played a part in the octogenarian's journey to incredible wealth, but there's a whole lot more to the story than just serendipity.

After all, what were you doing as a preteen?

His story is well told. Warren Buffett became a player in the investment game at the wee age of 11, eventually using cash he earned from his paper route to buy some farmland in his home state. As a high school sophomore, he also reaped the rewards of a booming pinball machine business.

According to the latest Forbes count, the so-called Oracle of Omaha is currently tipping the wealth scales at $73.1 billion. That's good enough to put Buffett, who turns 87 this summer, at number three on the US rich list, behind Microsoft's MSFT, +2.42 percent Bill Gates and Amazon's AMZN, -0.03 percent Jeff Bezos.

Buffett added about $12 billion to his fortune in 2016, making him the biggest gainer among wealthy individuals in the US, according to both the Bloomberg Billionaire's Index and a separate report from Forbes.

As Buffett's wealth approached the $70 billion mark last year, the Dadaviz blog put together the chart below with help from Dividend.com to show his rise from prodigious teen to the Berkshire Hathaway BRK.A, -1.13 percent boss.

Some notable Buffett milestones include his net worth topping the one-million-dollar mark at around 30 years old and then taking out the one-billion-dollar hurdle at 56 years old. The stretch from 59 years old to now hasn't exactly been unkind, either. And he doesn't appear to be slowing down much.

Check his complete life history out and be inspired! Or overcome with feelings of inadequacy....

In my view, there are two different ways to make money through lottery staking available for aspiring wealth seekers. The first one involves walking into a shop and play a weekly lottery ticket that is by default a trial-and-error game of chance. The other and more promising way is investing in start-up Pre-IPOs and Pre-ICOs, which is an assured form of investment lottery.

Ce que les auditeurs disent de Be Like Warren Buffet with Pre-IPO/ICO Investing, a Pathway to Financial Independence, for Preteens & All Investiors