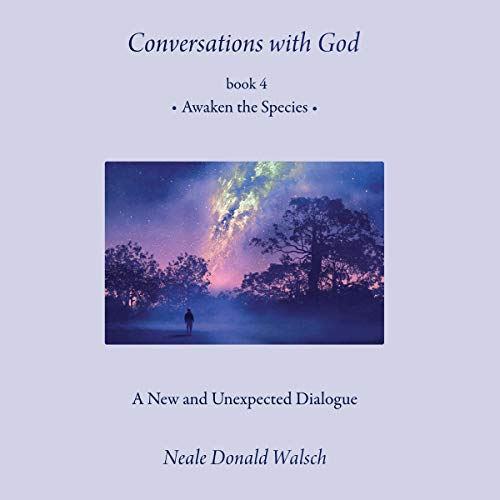 In the middle of the night on August 2, 2016, Neale Donald Walsch found himself drawn into a new and totally unexpected dialogue with God in which he suddenly faced two questions: Is the human race being offered help by Highly Evolved Beings from Another Dimension? Is there a key role that humans are being invited to play in advancing their own evolution by joining in a mutual mission to assist the planet during the critical times ahead?

He was told that the answer to both questions is yes.

Then he was given 16 specific examples of how Highly Evolved Beings respond to life differently than humans do - and how adopting even a few of those behaviors could change the course of world history for the better forever.

That information makes up the body of this work.

A striking invitation to every listener sets the stage for the extraordinary explorations that follow. Picking up where Book 3 in the Conversations with God Trilogy series left off, the revelations about Highly Evolved Beings and about how ordinary humans can answer the call to help awaken the species on Earth will breathtakingly expand your view of both your personal and your collective future.

Which is exactly what the dialogue was intended to do.

This book is a perfect conclusion to thr life-changing revolutionary thought process that not only puts the concept of God religion and life in perspective but ever since I started following conversation with God, I can honestly say I have not had a bad day in the past two years that I've been following the thought process of Neil's teaching

Perhaps the best CWG in the series. Big statement.

Takes long standing, deep societal issues to another level of understanding. Very important concepts are presented, which give us the chance to see our potential futures and create them.

Not the Same as the Other 3 books

This book was NOT the same as the first 3 books. This conversation with this God seemed more preachy, with judgement and ego focused on how to "save the world" verses focused as typically on YOU the individual and how it is important to focus on yourself as a means of collective uplifting. It falls in contradiction as to what Law of Attraction states which I thought Neale Donald Walsh was a avid believer of. This is more a conversation with Neal Donald Walsh and his concerns for the future of the Earth (environmental, political, world peace, etc.) and how we as humans are too primative to help those in need. We are just a bunch of hedonistic knuckle draggers who are to selfish to help anyone less fortunate or save our planet who need alien intervention to help save us. This book read like it was about things that were important to Neal Donald Walsh, not a conversation with God.

It is hard to put in to words what it felt to read this book. It was an experience and I will make it a point of duty to re-listen every week at least a chapter.

The most important book you'll ever read

If you could sum up Awaken the Species in three words, what would they be?

The most important conversation to hear and then implement in your life.

What other book might you compare Awaken the Species to and why?

It's a perfect summation of the trilogy series that came before it. Ties everything together brilliantly.

Life-changing. Brilliant. Such an honor to be able to have access to this wisdom.

I'm so beyond grateful to Neale and God for this.

Love it so so much, I have read every single book from Neale it totally changed my life. All of these books will take you into an experience to remember who and what you are. You'll feel Oneness with God when you listen to this. It's truly a beautiful experience that everyone would enjoy. I recommend this books to everyone I come across I think it could be the answer that everyone is looking for.

Mindblowing experience (if you keep an open mind)

I just finished listening the audiobook and all I can say is my life will be forever changed. The concepts in this book are so out there but in the same time they make you question everything about life and think about the endless opportunities it has to offer after you awaken. I have to say it was really hard for me to get a grasp of some of the concepts, even though I am deeply spiritual, I practice yoga, meditation and so on. So definitely this is not a book for everyone. If you have no spiritual or self awareness knowledge or interest you will most likely dismiss it as bs fantasy. However if you bypass that, try listening with an open mind and let the information really sink in, in the end you will awaken something in you. Its impossible not to. I know I did. Life has a different meaning for me now and from now on I will go down this path of studying even further these concepts. Blessings to all of you!

This is as amazing as the 1st 3 books... Since listening to the first 3 book my life haven't been the same...

Great conclusion to this series.

Great conclusion to this series. I wished the God voices were the original ones from books 1-3, but it was still great. Love, love love is the central message to spiritual advancement.

Simply brilliant, a must listen for anyone who inhabits this earth!

This fourth book in the Conversations With God series took me to higher and deeper levels of consciousness. I have expanded from listening and feel ready to embody the version of myself that is an example of these simple and powerful teachings. Thank you Neale, and of course... Thank you God.

I totally loved the book and its message, the narration is overwhelming. Each word keeps your attention and you constantly ask yourself about your own truth.

And if you love this book I recommend "Seth speaks" by Jane Roberts.