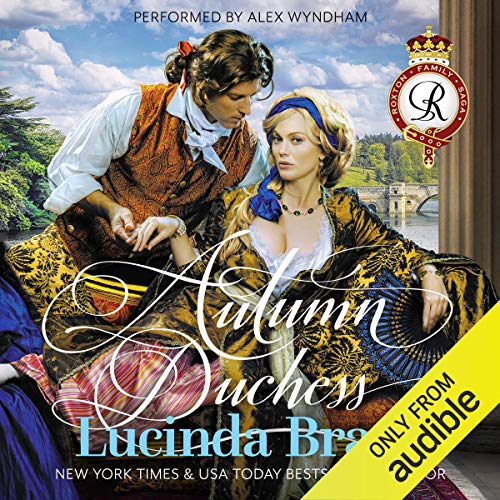 A different kind of happily-ever-after for the incurably romantic....

As Antonia’s world collapses around her, in swaggers a handsome stranger to completely upend her life. Little does she realize, this rugged merchant of mayhem is precisely what she needs.

I absolutely LOVE how cleverly written this book is. I enjoyed every minute of it. I feel book 2 is better than even book 1 and I really liked book 1. The story was gripping, engaging and completely riveting. An older woman and a man 10 years her junior. A couple of very passionate scenes without LB getting verbally descriptive sexually which I feel adds to the story rather than take away. You will not go wrong with this book.

The Autumn Duchess, what a perfect way to begin the season. I read this book several times over the years and it is a favorite in fact if I had to choose one of Lucinda Brant’s Roxton series to call my favorite this would be it. Ms. Brant’s skill as a story teller is always reinforced when I find myself completely lost in her books. This is Historical Romance at its best. If you care for impeccable research, terrific writing, and characters that you can fall in love with, it doesn’t get any better. This can be enjoyed as a standalone novel, but what fun would that be? Start from the beginning and be transported back to opulent Georgian England.
As for Alex Wyndham, he more than narrates this series he inhabits each character and brings them completely to life, a performance that only enhances Brant’s vivid and lively writing style. I understand there is more to come from these two, and I for one cannot wait!

Can True Love Be Shared Twice?

Would you listen to Autumn Duchess again? Why?

Yes! The scene descriptions are phenomenal. I also love the way this narrator has capture the story in its entirety.

Antonia, Dowager Duchess of Roxton, still young after 27 years of marriage, must start life anew without her husband. Her heart is so pained, she is unable to leave mourning even three years after his passing. She often visits the mausoleum where her husband is entombed.

Her son, nearing the end of his tether, has decided to threaten her—taking away privileges dear to her heart. I admit, Antonia was rather spoiled. A duchess and coddled most of her life, she now faces changes – some fearful and some unsettling. She shows her meddle, tempered with wisdom when facing these fears and heartache.

Where son is unable to pull Antonia out of her melancholy, a merchant, Jonathan Strang, does. Jonathan starts his association with Antonia brashly, shocking Antonia a bit from her stupor. He has an agenda for meeting the woman, but straightaway becomes intrigued, wishing to know the woman hiding under the garb of duchess. She in turn, is confused, angered, amused and eventually touched by the person he is.

I didn’t like Julian, Antonia’s son, as I did in book two. He acted entirely unfair and harshly when dealing with his mother. But readers, there is a reason, and Julian, duke of Roxton reprieves himself– somewhat.

Jonathan Strang took my heart this time. He is a man of deep waters, wonderful with children, honorable to a fault and does not tolerate hurting a woman. Yes, he won my heart completely!

Rich in description and authenticity, the opulence and excessive luxury of the story is part of the allure of this listen, coating your throat like a fine port—smooth with a slow burn.

Additionally, you will be kept amused by the rather arrogant and outlandish remarks from various characters to the most proper and dry butler who sees all and sees nothing. You will revel in the whirlwind lives of those gossipmongers who spin truths with lies. It makes my head spin.

You will be privy to scenes of such poignant and pure selfless love…and you will discover nothing is more important than family and love.

Narrator Alex Wyndham is so much a part of this series I would want no other to take his place. He captures the French accent spoken in English charmingly, and depicts the many nuances of emotions found in this era of excesses. I enjoyed his children’s voices and particularly the ennui of the aristocratic gentlemen’s voice. A fine production, indeed.

Note: I found I enjoyed the speed of the complete saga at speed 0.75x. It allows the words and divine voice of Mr. Wyndham time to appreciate.

Where does Autumn Duchess rank among all the audiobooks you’ve listened to so far?

Autumn Dutchess ranks in my top favorites along with all her other novels. Each one is richly detailed and full of vividly real characters. The stories take you into wonderful worlds full of history and unexpected events. Her books do not fall into the typical stereotypes and plot lines. Her characters dont just fall in love they learn and grow together. Reading the books in order is important. Do not deny yourself the pleasure of meeting her charactes and joining her world. Alex Wyndham is a superb narrator, perfectly bringing her people and facinating world to life. Intricate stories, with unexpected twists but satisfying plot lines are signature Lucinda Brant.

In this book the Dutchess continues to shine as a facinating lady with great humour and sensitivity. I love that she is off balance in this book and of course I love the great character of Jonathan who defies all convention and does not back down to anyone

What does Alex Wyndham bring to the story that you wouldn’t experience if you just read the book?

Alex is a part of the stories now, he too has become a main character in the series. His range of voices, his timing and his care of the narrative make him an essential part of the family. He becomes the hero of each book and his understanding of all these strong men communicates beautifully through his wondeful voice.

When Jonathan found her in the mausoleum after the torture was so moving and emotive.

Lucinda Brant is a master of all the elements in writing Historical Fiction. Her writing is fluent and captivating, bringing all the threads together to weave great books

I have read, "Autumn Duchess" a number of times and loved the story so very much. Just imagine to my delight to hear Alex Wyndham's marvelous voice in the character of all of the people I have come to know, admire and love! His voice takes on the great sadness that Antonia, Dowager Duchess of Roxton, feels after the loss of her great love, the Fifth Duke of Roxton, now going on three years. Her friends and even her oldest son begin to wonder about her sanity. Than Jonathan Strang, a bronzed, devilishly handsome merchant who is a decade younger than her pursues Antonia, and is bound and determined to make her his bride to the surprise of Antonia and to her oldest son who is now the Sixth Duke of Roxron who is bound and determined to run the "wolf" away from his mother. Will Antonia give into her emotions and desires that suddenly have come alive by Jonathan or will she remain alone and determined to remain loyal to her dead husband. You must read and than listen to Autumn Duchess, by Lucinda Brant. You will fall in love with the "The Roxton Family Saga" which this is the third book of the series.

I am rapidly running out of superlatives . . .

. . . to describe the audiobooks produced by author Lucinda Brant and actor Alex Wyndham, but "sublime" comes to mind here.

Everything about this book works: the plot, the characters, the setting. Alex Wyndham's performance is just the icing on the cake.

I fell in love with Antonia’s much older first husband Renard when I’ve read the first book of the series “The Noble Satyr”. Their love was so strong and beautiful that I was reluctant to read her second chance at love. I though no one could ever replace Monseigneur. I was wrong! Or I was partially right because Jonathon did not replace Monseigneur, or ever intended to. He was a fresh start, a total new experience for the Dowager Duchess of Roxton, the adorable and indomitable Antonia. This book is so good I have no words to express it. In one side a person in deep grief for her much older husband, in the other her family desperate to help her see that life should go on. The conflicts between her and her son are so real, the struggles to understand each other, the complexity of familial relationships. Her relationship with her daughter-in-law, her younger son, her grandkids, everything is emotional and real. Then comes Jonathon, a person who understands her pain (he is also a widow), a person that reaches for her soul and grabs it in such a wonderful and romantic way. I never though I would say that, but I think Jonathon was her real soulmate. Monseigneur was a little bit of a father figure. With him she was not in equal ground (because of the big age difference). Monseigneur was her savior, her love and her safe place, while Jonathon was her adventure and her equal in all instances. Wonderful read! I recommend reading the books in the series in order and also the book with the letters (have a tissue at hand). Last, but not least, Alex Wyndham’s narration is a dream. He is my favorite narrator and so very talented. A treat to the ears!

Lucinda does it again- such an amazing story! I love Jonathan and the Dowager Duchess. This has been my favorite story of the series so far! The narration done by Alex is spot on with each character. This novel is a favorite of mine now. Definitely a reread and re-listen!

Thoroughly enjoyed this book. Excellent narration and story. A few caveats were that the narration sometimes took on a monotonous cadence, was fast, and was sometimes hard to follow—especially with so many minor characters. But doable with a couple of rewinds. I'm not fond of audio books with children's voices taking up such a large part, but for some reason, that was tolerable in this book, as they did not act spoiled. I was surprised at the fixation with man parts and the H's internal dialogue with his own bits and pieces. Somewhat eye-roll worthy.