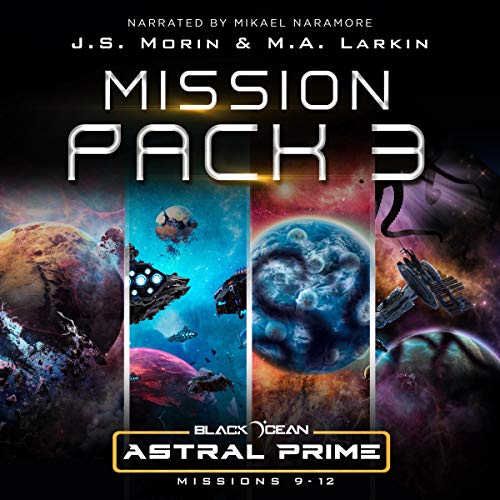 The search for knowledge will be the salvation of mankind...or the destruction of the universe.

The temptation of ancient wisdom proved too much for them to resist. Now, Hiroko and Cedric must each face the consequences of the secrets they unlocked - and the terrors they recklessly unleashed.

Mission 9: Void Kraken
Unleashed from an alternate universe, the space-borne leviathan dubbed "void kraken" terrorizes the galaxy. The most powerful weapons barely scratch it. Whole fleets fall before it. Its movements are erratic. Its motives inscrutable. All anyone knows for sure is that if it isn't stopped, it's going to eat its way through the galaxy.

Mission 10: Stellar Rampage
The galaxy is in a state of panic. A horror has been unleashed, and it's a threat to every inhabited planet. Luckily, it currently rampages across a sparsely populated part of the Black Ocean. But even that callous view only hold limited hope for the fortunate species whose worlds lay safer by virtue of distance. Sooner or later, someone is going to have to destroy it.

Mission 11: Core Threat
The galaxy has gone from troubled to doomed. Now faced with a multiplying threat, the races of the Milky Way are faced with a foe who cannot be stopped, cannot be turned back. And yet, for the sake of their own survival, they fight on in the desperate hope that they can hold out long enough to prevail. And they're running out of time. One of the ARGO core worlds may be next on the menu for the world-devouring monsters.

Mission 12: Terminal Gambit
Cedric has discovered the means to fight back, but the price is high. Not all species are capable of carrying out his methods. It's one thing asking ships and crews to fight; it's another to ask them to sacrifice themselves. And yet, the valiant ships of Earth Navy continue to do so. If only the rest of the galaxy were so brave.

I have really enjoyed of the block ocean series books. And up till this current Mission Park, Astral Prime Was easily over taking both Mercenary for Hire and GalaxyOutlaws as my favorite. But the problem is is that this book is way too much on a character who is losing their humanity. At first it was interesting and shocking that it happened, But then several missions became filler in between content. It is certainly more to read and it does expand on the story, but it feels less planned out than the rest of the series and there are several chapters that just grind on gears for unnecessary links and monologues of interpersonal thinking. There was five times I wanted to quit and technically I did, but I forced myself to read through the rest because I had already paid for it and I wanted to see what the ending was because it was kind of obvious where they were going but the journey that it was not worth it at all. I do praise the authors for sticking to their guns and not taking the easy way out. But it was simply just drawn out way too long and for what it was it was not amazing ride to get to the ending. I totally understand that there needed to be some introspection going on, but it didn’t lead to an ultimate ending where are the introspection was meaningful. That’s why I think the other series are slightly better when it comes towards the latter half of the series. For fans of the series this will probably be a decent read but it’s still going to be hard to get through, and it’s kind a hard to recommend the submission pack to anyone that hasn’t read the rest of them because it might not make any sense as to what’s going on. But with that said I really look forward to seeing more in the black ocean series and I will continue to support it.

The first few books in this series had a lot of promise but the characters quickly devolved to help move the plot which could be forgiven if the plot had not petered out and drug on forever to never really go anywhere.

good story, but you find yourself often asking to hurry up due to the significant amount of internal dialogue and reflection