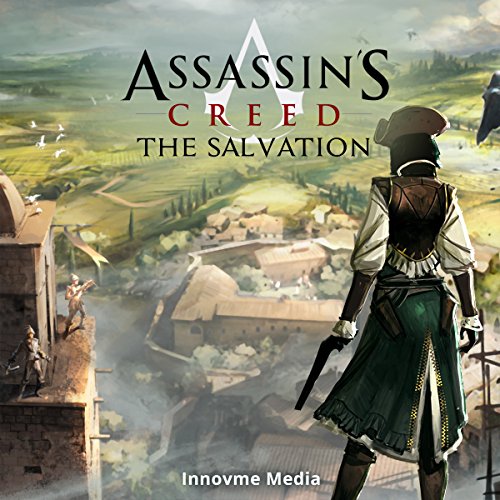 Desmond Miles is a descendant of the Assassin Order. He was trained as an assassin by William Miles, his father. Tired of being confounded in the assassin territory, Desmond relocated to New York City in order to pursue his dream and ambition. He got employed at the Bad Weather nightclub as a bartender.

How Do You Pronounce Catastrophe?

The story is ordinary, disconnected at times, not making sense at times and pretty much a waste. Which normally is OK for me. I enjoy blah during some meetings.
However, the narrator is really bad. Not bad in voice, but he cannot pronounce words correctly. At first, I heard a word mispronounced and thought, &quot;OK, maybe he's from the UK and they say words a bit differently. Tomato, tomato.&quot;
I even ignored the second, third, fourth, and fifth words that sounded like they were strained through a sack of potatoes. Around mispronunciation number eight, I was screaming in my head, &quot;Hey now! I KNOW that isn't right and I'm not the grammar police.&quot;
Makes me want to read these aloud myself.

What would have made Assassin's Creed: The Salvation better?

It would have been nice if the story followed the existing canon.

Would you ever listen to anything by Innovme Media again?

I will not be picking up anything by Innovme Media.

What does Jean Maldonado bring to the story that you wouldn’t experience if you just read the book?

Jean Maldonado had a great voice! His pronunciation for names left something to be desired.

The only redeeming quality of this book is the fan fic fodder that Lucy may have been the Templar Leader all along.

For ALL the Assasin Creeds on Audible that I've loved..I HATE this one! The pronunciations and tones were ghastly! The recording sucked!!! WHY DID AUDIBLE RELEASE THIS CRAP?! 😭😭😭😭😭😳😢

The reader is not good. His cadence and mispronounced words were very distracting! In the last half of the story he kept dropping words from the sentences and running other sentences together.

this is a rare time I didn't enjoy the book

I saw the poor ratings from others, but really wanted to like it. I've listened to all other AC books here on Audible and there was not a single redeeming segment. the story is poorly formed, and the narrator was not as successful in bringing the characters to life. I had a hard time with him sounding clear or mispronouncing words. that stuff takes me out of the zone and I can't get back in the story.

don't waste your time clearly not canon written like a horrible horrible anime movie narration is terrible sounds like a bad phone scam callercouldn't even finish the book and it is super super short that is how bad this book is. I gave one star ratings because there's nothing lower

Reads like a book review based on a wiki article

This book from what I've been able to slog through in its micro chapters reads like a bad book review written by someone who's only read a wiki article on the 3 games its based off of. The narrative jumps around and is really hard to follow as to who's talking. The narrator does an OK job but his pronunciations are stilted and it sounds like the text was put through an translator to English because some of the word choice is either a synonym for the word that should be in the sentence. All in all skip this I'm glad I didn't pay that much for it.

That was so terrible bad and out of canon that it was nearly entertaining again...