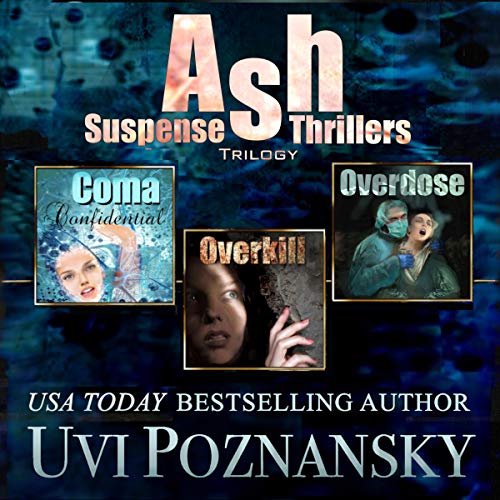 Ash finds herself in the ER diagnosed with coma. She has no memory of what has happened to her, but what she can do - despite what everyone around her might think - is listen to the conversations of her visitors. One of them is the man who raped her.

For Ash, there is little time to gather clues. Blackouts are happening not only in the hospital, but throughout California. The Russian hackers who are intent on sabotaging the power grid are trying to blackmail her boyfriend Michael into helping their cause. And what better way for them to do it than by kidnapping her out of the hospital?

The last thing Ash expects when she lands in Clearwater, Florida, is to be stalked by a troubled teenager. If that's not bad enough, she is caught in a shooting spree next to the nearby elementary school.

The cops think it’s an attempt at mass killing, but Ash wonders if the only victim was specifically targeted by the killer. Will she manage to identify him and have him arrested before he comes after her?

After recovering from coma, Ash discovers that the man who performed her brain surgery has a questionable medical experience and a dark past, starting with his medical mission in India 10 years ago and ending just recently with his wife’s suicide.

Should Ash expose him, at the risk of becoming vulnerable to his revenge?

Edge of your seat thrillers!

Ash Suspense Thrillers is a medical mystery trilogy that held me spellbound, constantly holding my breath. When I read the books, I couldn’t stop turning the pages, and I was thrilled to find them released on Audible. Now, I could experience the saga all over again as the narrator brought them to life.

Written by USA Today best selling author, Uvi Poznansky, the first person point of view drew me into the mind of the heroine as she unraveled each mystery. This author’s style continues to paint masterpieces on the canvas of my mind.

In book one, Coma Confidential, Ash is a young woman who barely survived a brutal beating and rape. She doesn’t remember anything, including her own name, but she slowly pulls together the puzzle pieces, unravels the mystery, and discovers someone wants her dead.

Book two, Overkill, finds our heroine, Ash, in Florida. Stalked by a troubled teen, she’s constantly looking over her shoulder, especially after she gets caught in the crossfire of a terrorist attack at a local school.

Book three, Overdose, brings the reader back to the aftermath of her coma, and the doctor who originally performed her brain surgery. Something about him niggles at her, and she is drawn into another mystery when she hears about his wife’s death. She can’t help but wonder if this doctor had something to do with the woman’s murder. Again, Ash’s curiosity lands her in the crosshairs of a murderer.

The nail-biting suspense, richly drawn characters, and dark psychological plots will keep you on the edge of your seat as you read every mystery, hoping the heroine will discover the culprits before it’s too late. Written in first person, from the point of view of Ash, these gripping thriller plots, along with Poznansky’s lyrical style, will sweep you into the suspense and hold you captive. I highly recommend this series.

I really enjoyed this series! Each book is a stand alone suspense thriller. All have plenty of action, as well as twists and turns. One of the things that I like the most about this series is author Uvi Poznansky's ability to turn what could be mundane, ordinary events into exciting adventures. In book one, Coma, who knew that being in a coma and coming out of it could be such an interesting adventure? In book two, Overkill, the heroine, Ash is hoping to get back to leading a normal life, but more adventures come her way. The surprises in the plot kept me eagerly listening. In book three, Overdose, just when listeners think that the doctor who treated Ash during her coma was clueless and mediocre, his character comes to life. His disturbing personality is revealed.

The narrator, Heather Jane Hogan, does an excellent job. Her voice has the perfect amount of excitement. I liked her portrayal of the various characters' voices.

I will definitely want to listen to other books in this series!

I totally enjoyed this trilogy. Ash awakens from a coma to find that she has been brutally battered and the man who did it is close by.She fakes her reliance on medical equipment as the grid goes down again and again.Her boyfriend is being blackmailed and she is a pawn. Throughout the three books we see how the stories of friends,family and neighbors come together to make for a bad situation.In the end there is always mom. Heather Jane Hogan was a very good narrator.I was given this free review copy audiobook at my request and have voluntarily left this review.'

I've never read/listened to this author before but I really liked this thriller boxset. Each is a standalone story with characters reoccurring. The suspense is great and has an underlying love story. I'll definitely be looking for more from this author.

First time with the author

This box set is my first exposure to this author and I can’t wait to read/hear more!

COMA
Ashley is in a coma, yet the voices are real, and She knows danger is also to finish what he started. Author gave a moving in-depth look from a person in a coma. Giving her a voice if only she could wake up and tell others. Good three book series I enjoyed. The narration by Heather added to the characters and stories. Given audio for my voluntary review