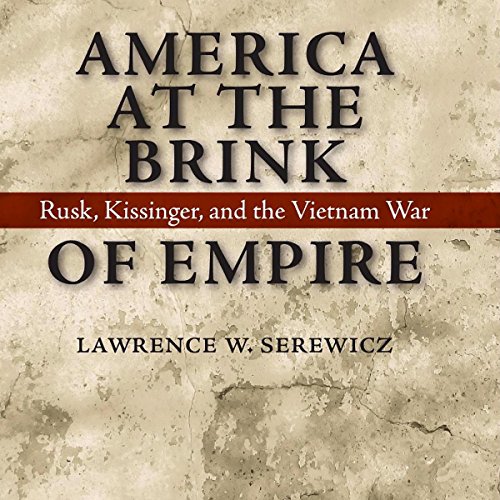 America at the Brink of Empire

Addressing issues of continuing if not heightened relevance to contemporary debate, America at the Brink of Empire explores the foreign policy leadership of Dean Rusk and Henry Kissinger regarding the extent of the United States' mission to insure a stable world order. Lawrence W. Serewicz argues that in the Vietnam conflict the United States experienced an identity crisis - a near Machiavellian moment - whereby America came close to assuming an imperial role, stretching the country to the limits of its identity as a republic. Serewicz offers a revealing look at the parts played by Rusk and Kissinger - and President Lyndon Johnson - in bringing the nation to the brink of empire in the years 1963-75.

As a true believer in liberal internationalism, Rusk set the stage by defining the war in Vietnam as a threat to the world order based on the United Nations security system created after World War II. Johnson kept an open-ended commitment in Vietnam without a clear goal in sight even as he pursued the ambitious domestic reforms of the Great Society. In refusing to choose between either an imperial mission or a true republican position for the nation, he brought it perilously close to becoming an empire, ultimately failing to achieve his goals either at home or abroad. Kissinger corrected for Johnson's overreach, implementing a pragmatic realism based upon the principle that the United States is an ordinary country - a republic, not an empire - within the international community and therefore must balance its commitments with its resources.

In concluding, Serewicz reflects on the continuing relevance of the Machiavellian moment for the United States by observing the differences and similarities between the presidencies of Johnson and George W. Bush.

The book is published by Louisiana State University Press.

Here the story of Vietnam (and to a lesser extent, W's war on terror, at least in its earlier phases), alongside the thinking of the principal presidential-cabinet architects, gives us a framework to consider the American project globally after World War 2 (and to the present). The primary figures are Dean Rusk under LBJ and Kissinger under Nixon. Rusk was the idealist with no sense of limits to the American project. Kissinger was less sweepingly idealistic and more tactical, more attuned to limits to American projects and ideals abroad. My only criticism would be, the author gets repetitive sometimes. However, as a survey of ideas and their practitioners, made into policy on the ground, and the results for the USA, this in a very fine, clear discussion. The audio version apparently came out in 2017, but the book is copyrighted 2007. For the last hour or so, the book pivots to (and compares the earlier war with) George W. Bush's so-called war on terror and global democratic revolution (yeah, remember that over-the-top bit of hubris?). The discussion seems to date from at least a couple years earlier than that. The financial meltdown of 2008 is of course nowhere on the radar. But the whole discussion is on a high enough plane that it remains pertinent to the central questions of USA's foreign policy, right down to this moment.
Apparently (and these are my words, not this author's), behind W's thinking, was the image of everybody all over the world dropping their silly wayward cultures and rushing to open burger stands (after showering us gratefully with flower petals) at the first drop of our boots and bombs. Bush thought that he (we) could literally change the flow of history, as did Lyndon Johnson. Both of these Texans were carried away (and carried us away) on a wave of costly fantasy. (Also not mentioned here: the ties of both those men to Halliburton/KBR.) This in W's case was to occur by means of an endless ill-defined militarized global conflict, thus also weakening our basic constitutional structure (strengthening his branch, of course) and shoving our economy over onto a military footing (at a level, IMO, we did not ever need, and have not needed). What intoxicant were the USA's people ON, to not scream bloody protest? Fear, cranked up[ with W's help. This book stays out of the bitterness I am expressing here; it has a uniformly calm and sober voice, staying in the world of ideas, and it is the better for that. Listening, I breathed a sigh of relief that, after this writing, our other great (2000-2008) globally-impacting national screw-up, aka the global financial meltdown, alongside W's grotesque floundering in the planning and execution of the Iraq war, caused us to step back at least fractionally from the brink of an even more suicidally-foolish further thrust into a global attempted bloody military crusade-makeover that I think could have spelled the end of USA as we know it. It could have been our Barbarossa. (So, the knowledgeable reader might note, I cleave toward Kissinger's style of limited foreign policy.) As it was, in 2008, as our own people scratched to keep their heads above water, there was some pause. Some perhaps over-anxious people in the middle east seemed to take us at our word and launch into an Arab Spring, so-called, that has for the time being largely descended into chaos. Our presence there was, as so often, very patchy, after an initial rush of overconfidence and much clamorous idealism. I don't think we can handle another such mess of presidential misdirections, overreactions, delusions and manias. This book is a sober appraisal of the crucial stakes domestically and internationally of the USA in getting these balances right -- nation-building (and demolition) where, for whom, at what cost? And for what principles, and what scope of ambition? As I write this, President Trump has addressed the UN today, and so far, we have managed in his administration (while stepping on plenty of toes) at least not to tip off some precipice as in the fiascos this book calmly appraises. My fingers are crossed, hoping at least as much for dumb luck on his part, as for good calculated decisions and favorable conditions. I think it is a good time to ponder the points discussed lucidly in this book and have a national conversation.