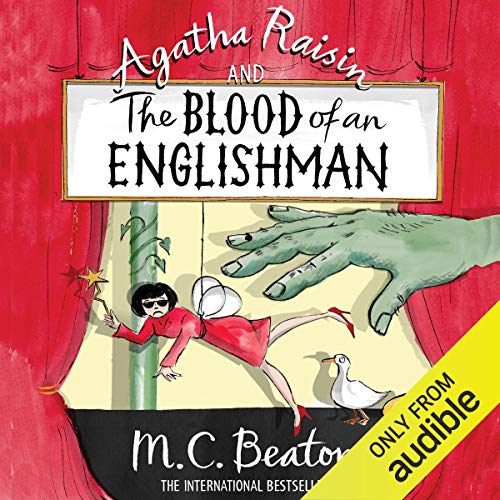 Agatha Raisin and the Blood of an Englishman

Even though Agatha Raisin loathes Christmas panto, her friend, Mrs Bloxby, the vicar's wife, has persuaded her to support the local am dram society in their festive offering.

Stifling a yawn at the production of Babes in the Wood, Agatha watches the baker playing an ogre strut and threaten onstage until a trapdoor opens, followed by a scream and silence! Surely this wasn't the way the scene was rehearsed.

When it turns out the local baker had been murdered most horribly, Agatha puts her team of detectives on the case. And they soon discover more feuds and temperamental behaviour in amateur dramatics than in a professional stage show - and face more and more danger as Agatha and her team get too close to the killer.

M. C. Beaton was born in Scotland. She worked for many years as a journalist on Fleet Street. As well as the best-selling Agatha Raisin series, she is the author of the acclaimed Hamish Macbeth mysteries. She divides her time between the Cotswolds, where she lives in a village very much like Agatha's beloved Carsely, and Paris.

"The detective novels of M C Beaton, a master of outrageous black comedy, have reached cult status." (Anne Robinson, The Times)
"Agatha is like Miss Marple with a drinking problem, a pack-a-day habit and major man lust. In fact, I think she could be living my dream life." ( Entertainment Weekly)