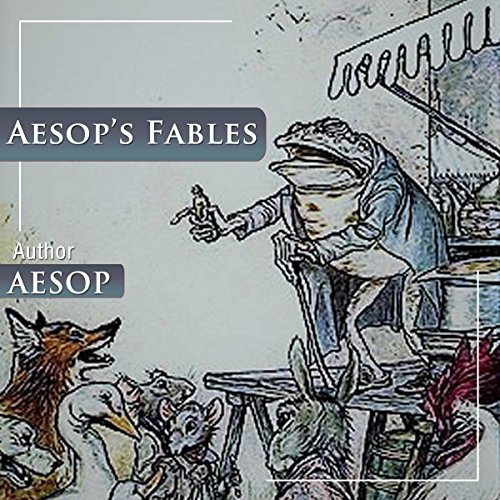 Aesop's Fables is a collection of fables credited to Aesop, a slave and storyteller believed to have lived in ancient Greece between 620 and 564 BCE. Of diverse origins, the stories associated with his name have descended to modern times through a number of sources and continue to be reinterpreted in different verbal registers and in popular as well as artistic media.

The fables originally belonged to the oral tradition and were not collected for some three centuries after Aesop's death. By that time a variety of other stories, jokes and proverbs were being ascribed to him, although some of that material was from sources earlier than him or came from beyond the Greek cultural sphere.

The process of inclusion has continued until the present, with some of the fables unrecorded before the later Middle Ages and others arriving from outside Europe. The process is continuous and new stories are still being added to the Aesop corpus, even when they are demonstrably more recent work and sometimes from known authors.

The Aesop collection you're looking for.

There are many collections of Aesop's fables available, but most of these have been censored for children. Heidi Gregory's reading though, is the real deal, with all the macabre and politically incorrect details often brushed under the rug for the sake of taste. These are very old tales though and for those interested in the history of them, this audiobook provides the most representation of the originals as possible. Yes, there are quite horrible fables like "the Ethiopian and his master who tried to scrub his slave's dark skin clean with every type of wash possible", but that is really the most obviously racist fable in this collection. As far as Aesop fables go that are read by one person, Heidi Gregory is by far the best narrator...or at least the only British one, which is the main reason I purchased this audiobook.

Aesop’s fables is a classic that the entire family needs to read or listen to, and better yet, put it into practice!

The narration by Heidi Gregory was simply excellent.

I received this audio-book free for an honest review by the author, narrator, or publisher. Thank you!!!

If you found this review helpful would you please take a moment to click yes below, thanks!

Worthy of a listen. Well done. A classic that has stood the test of time.

Excellent listening for the kids & us at night

Top notch reading and wonderful classic material for everyone. I love the lessons and if only half stick its well worth it.

Beautifully read and of course beautifully written; Ms. Gregory did a fantastic job with these precious classic tales. This book is a very nice tribute to Aesop's work. She's got a lovely voice - the entire book came through crisp and clear. Good narrator and good audio overall. I was given this free review copy audio-book at my request and have voluntarily left this review.

Originality at its Best

I knew there were hundreds of Aesop’s Fables but only knew a smattering of them. I enjoyed listening to this collection; the vocabulary and sentence structure is more advanced and appreciated for above elementary ears, although parents can listen with youngsters.

Heidi Gregory does a fine job with narration of these old fables.I did not know a lot of them.“I was voluntarily provided this free review copy audiobook by the author, narrator, or publisher.”

This collection is a great listen. It shows that even with all the changes that have occurred in the 2+ millennia since these were written, fundamental human nature has not changed much. These lessons written as fables as just as relevant today as they were when they were written.

A great book for all ages, each fable is only about a minute long so this can be listened to in small sections, a fable at a time, or in larger sections.

The narration is done well, the pace and tone of the delivery is easy to listen to.

Reading this as an adult has a different meaning

Great performance by the reader too. This fables are a must for everyone. Kids and adults alike.

This is the best collection of Aesop's Fables in audiobook form I have found. These are the non-corrupted politically corrected versions of the fables.Some of the fables have the life lessons explained and attached at the end of them for the listener. I highly recommend this audiobook. Heidi Gregory does an amazing job with the narration. Her accent is pleasing to me and very relaxing to listen to as she narrates these short fables. This book was given to me for free at my request and I provided this voluntary review.