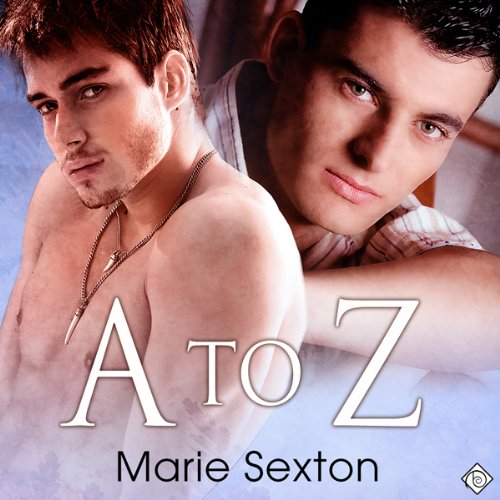 Zach Mitchell is stuck in a rut. His college boyfriend left him 10 years ago, but Zach still lives in the same apartment, drives the same car, and feeds his ex-boyfriend’s ungrateful cat. His Denver business, A to Z Video Rental, is struggling. He has annoying customers, eccentric neighbors, and an unfulfilling romance with his landlord, Tom.

A combat boot-wearing punk with an attitude, Angelo Green was raised in foster homes and has been on his own since he was sixteen; he has never learned to trust or to love. He doesn’t do relationships, so when Angelo takes a job at A to Z Video, he decides Zach is strictly off-limits. Despite their differences, Zach and Angelo quickly become friends, and when Zach’s break-up with Tom puts his business on the line, it’s Angelo who comes up with a solution. Together with Jared and Matt, their friends from Coda, Colorado, Zach and Angelo will find a way to save A to Z, but will they be able to save each other too? (Listen to Jared and Matt's story in Promises.)

A good love story with plenty of steaminess!!!

The characters seemed 3-dimensional, full of life and emotion. Love can be complicated, blind and all of the above. I thought the author portrayed the characters well. They were both frustrating and exciting. Definitely worth the listen but beware that the narrator is terrible and takes some getting used to.

What did you love best about A to Z?

I LOVED this story. Sexton is one of my favorite authors in this genre. She gives us beautifully written love stories between 2 men with all the angst that goes with it and not more than is needed.

Who would you have cast as narrator instead of Mark L. Jones?

Anyone... No seriously, he sounded BORED reading. Paul Morey, Sean Crisden, or Sawyer Allerde would have done SOOO much better.

Issues to Work Through

Zach is just maybe ready for some changes in his life but he's pretty much just been going with the flow for life. But suddenly everything seems to be changing. Angelo has been hanging around the store and trying to get Zach's attention but he seem a bit too late but they still end up friends and then co-workers. Eventually, things get more involved but both of them seem to have the need to process all the changes in their lives. They also seem to have stuff that they need to work through if they are going to be able to make it for the long hall.

Where does A to Z rank among all the audiobooks you’ve listened to so far?

I loved it. I've never really listed to a book that I was disappointed in, though. I only buy audiobooks that I've already read in paperback or eBook so I go in knowing I like the story. I've also learned to appreciate different narrators quirks and style. This one took a little getting used to, but he seems to fit the series.

What was one of the most memorable moments of A to Z?

I love all of Zach's odd neighbors at the shop and every single thing about Angelo. I want to cuddle him up in a blanket and keep him safe forever, which would make him run away from me in horror, of course.

What does Mark L. Jones bring to the story that you wouldn’t experience if you just read the book?

I think he fits the attitude of this series, especially from Angelo's POV.

I laughed and smiled and it kept me company on my car rides. Angelo touched me the most, I felt very drawn to and protective of him.

I LOVED this book. It is another great example of the author refusing to play into most stereotypes of gay men, and has a perfect tie-in to the previous book. I listened to the whole thing in one evening! You will love it. I do recommend listening to Promises by Marie Sexton first, so you know what I am talking about with the tie-in from her previous work.

Narrator still needs some work though....

Left Me Wanting Compared to "Promises"

Yes, although not as satisfying as "Promises", I still enjoyed it. Too much sex and less of the "chase" for my taste. And I can't fall in love with Angelo's character. I found him to be mean at times.

A little less sex and more romance would have made it more enjoyable. The fact that the main characters have already accepted their gay identities made the "chase" or "hunt" less challenging.

What about Mark L. Jones’s performance did you like?

I like Mark L. Jones' performance in "Promises" and I like it in this audio book too. He has vulnerability in his voice. I enjoyed the story more because of his narration. He can improve on the delineation of the characters' voices. Sometimes it's hard to discern who's actually talking.

Could you see A to Z being made into a movie or a TV series? Who should the stars be?

I'm pleased to hear about Jared and Matt again from "Promises".

Could have been better.

There are two main characters in this book but the narrator does not change his voice for them or the other few minor characters. I would have to go back to make sure the dialogue was for the correct character. Other than being annoying to listen to, I genuinely enjoyed the story.

I am pretty bored!

Maybe I will finish this, maybe I won't. I am pretty bored. This seem like it has been done before...but way better. I have been listening to a lot of m/m romances lately and this is just not doing it for me. I really want get to the next story in this series... the "Strawberry one" but I want to follow the series in order, I hate listen out of order... Man O Man... this is just sooooo boring....

Narration sounds just like Promises. Good, but kinda sound just the same, so not good.

I could only stand it for about 15 minutes, so I can't really judge the story. Returning this one, way too expensive even though it was half price.