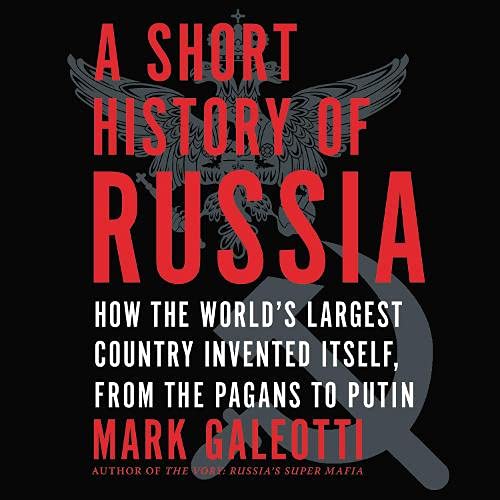 A Short History of Russia

A Library Journal 2020 Title to Watch

Russia’s epic and dramatic history told in an accessible, lively, and short form, from Ivan the Terrible to Vladimir Putin via Catherine the Great, the Russian Revolution and the fall of the USSR.

Russia is a country with no natural borders, no single ethnic group, no true central identity. At the crossroads of Europe and Asia, it has been subject to invasion by outsiders, from Vikings to Mongols, from Napoleon’s French to Hitler’s Germans. In order to forge an identity, it has mythologized its past to unite its people and to signal strength to outsiders.

In A Short History of Russia, Mark Galeotti explores the history of this fascinating, glorious, desperate, and exasperating country through two intertwined issues: the way successive influences from beyond its borders have shaped Russia and the way Russians came to terms with this influence, writing and rewriting their past to understand their present and try to influence their future. In turn, this self-invented history has come to affect not just their constant nation-building project, but also their relations with the world.

This is an ideal example of what a short history can be, and I highly recommend it to anyone looking for an introduction to Russian history. There is a Very Short Introduction on the subject and a couple of Great Courses offerings along the same lines; and of course there’s Martin Sixsmith’s BBC series. But if I were you, I’d start here. Mark Galeotti the writer has the trick of presenting information with a pace, clarity, and informality that makes it very easy to absorb while still including a surprising amount of detail; and Mark Galeotti the narrator is very easy on the ears. I enjoyed it a lot — in fact, after a brief pause to let the info percolate, I plan to listen to it again.

A lifeline for the Russia-curious

I don't know a lot about Russian history but I would like to know more. Is this book going to cure my ignorance? Well, no. But it's a start.

While this brief book is sometimes all too brief, it includes a lot of other book recommendations to carry you through various points in Russian history. It was worth it for that alone (although I wish we got a pdf with the audiobook to list the recommendations in one place).

A special bonus is that the narration is quite good. There are some books where I think "why on earth did they let the author read his/her own work?!" But Galeotti does an excellent job with the basic narration and a few sly asides.