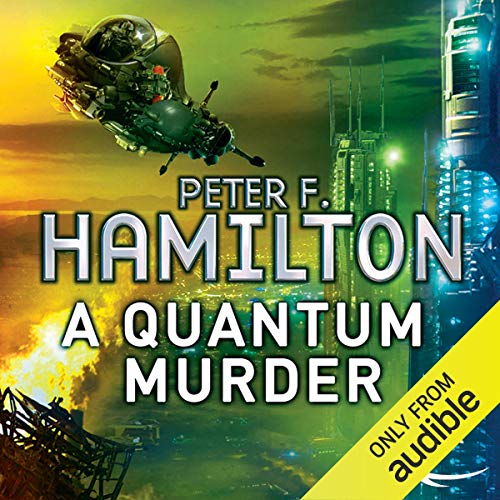 Dr Edward Kitchener, a brilliant researcher into quantum cosmology, lies dead with his lungs spread out on either side of his open chest. Only a mercenary or professional killer could have breached the premier-grade security system - but why would a professional waste time in ritual slaughter?

Greg Mandel, psi-boosted ex-private eye, is enticed out of retirement to launch an investigation into a past which - according to Kitchener’s theories - might never have happened.

A Quantum Murder is the 2nd book in Greg Mandel trilogy. Although, this is a standalone story, all the relevant characters from Book 1, Mindstar Rising, are back, so the background is useful. The story occurs about 2 years after the 1st with the same general conditions in place. This time around, Greg is dragged into a murder investigation of a prominent physicist who was doing work for Event Horizon. In spite of appearing to crack the case, his intuition suggests something is amiss and he pursues justice with a Mandel doggedness.

Hamilton introduces some bizarre physics dealing with apparent time travel without the typical causality paradox. In addition, he explores the world of designer synthetic chemistry (probably around the time that ecstasy was becoming popular in England) and the biology of memory. Surprisingly (for Peter Hamilton). the sci-fi components are not only underwhelming, but nearly fade into the background as the mystery deepens. At its heart though, this is an engaging and erudite who-dun-it. The only slight detriment is the "Night of the Living Dead" scene close to the end which was just a bit over the top..

Early Hamilton - he got better

I didn't do my research when I selected this book. I thought it was a new Peter Hamilton and jumped into it right away. It didn't take long for the dated buzz words and clumsy writing to convince me this must be an ancient book. A little research and yes, this book is more than 15 years old.

Peter F. Hamilton has certainly grown as a writer. But knowing the proper frame of reference for this work I able was to sit back and enjoy this young work. If you listen real close you'll be able to hear the beginnings of characters, situations, and technologies that would be showcased in the Commonwealth Sagas and in the Void books.

I downloaded this book on the day Audible made it available and there were a few technical issues with the recording (especially, part 2 of the download). Audible may find these and fix these but if they don't you'll be able to hear the narrator turn pages and hear the narrator mock the writing (don't remember the exact quote but the narrator disapproved of the author's describing a character's hair as "manes"). Unfortunate, as the reading by the narrator was excellent - he did a great jump picking "voices" that match the persona the writer had wanted each character to project.

Not one of Hamilton's best

If one has not read volume one in the trilogy, I think A Quantum Murder may strike some readers as pretty far out. The geopolitical background in the first novel is essential for suspension of belief in the second.

Has A Quantum Murder turned you off from other books in this genre?

I am 71 and have been reading Sci Fi and fantasy since Heinlein in the 50s. Nothing is going to turn me off of speculative fiction.

Do you think A Quantum Murder needs a follow-up book? Why or why not?

There is a third novel in the series. I hope it is better than the second. It is my next walking read.

Would you listen to A Quantum Murder again? Why?

While there were a few minor issues for me, overall I liked this book and I think anyone who enjoyed the first one will like this one, and may even enjoy the slower pace. I like sci-fi and I like who-dun-it stories, and this was a good meld of both genres. It's more of a classic detective story than the first book as well. The characters had individual quirks, were easily distinguished from each other, so no getting them mixed up. There were links back to the first book - although things are explained so you don't actually have to have read/listened to the first book. I was quite sorry when it was over and it was good enough for me to want to listen to the next book in the series.

The reader is brilliant, the characters are brought to life with his vocalisations.

The story pace is slower than the first Greg Mandel book, but it suits the story. There are no wasted scenes (except the end - more on that below) and while some might figure out the villain ahead of time, I did not, which was great for me - I don't like working it out before the protagonist. There are a couple of actions scenes in the last half of the book, including a strange one at the end, which seemed to be thrown in to cater to a more action orientated audience. I didn't think it needed it to be honest, and there were at least two parts to it that made no sense to me and one of them had Greg acting unusually, acting against his nature and not in a good way. It seemed that while most of the book had a "British" detective style, the end scene was definitely "American" detective style (not intended as a slight, only as a style comparison).

The editing isn't great. There are pauses where there shouldn't be, so where you think there is going to be a scene change or new chapter turns out to be a continuation of the last scene, and at about the 1:16 mark in the second segment the reader asks incredulously what a "mains" (or "manes"?) is which obviously should have been edited out.

Hamilton Does It Again

What made the experience of listening to A Quantum Murder the most enjoyable?

Peter F. Hamilton always does a fantastic job of weaving an intricate story line. The futuristic settings are believable, and the characters behave in logical ways. He doesn't have to force the story line along, it just flows naturally.

What was one of the most memorable moments of A Quantum Murder?

The opening sequence. The imagery is vivid without being over the top, it makes you feel like you're actually there, seeing the torrential downpour of rain. Waking to screams. It hooks you and pulls you in.

Which character – as performed by Toby Longworth – was your favorite?

Greg Mandel. Toby has the perfect voice for the gruff former Mindstar operative.

It was. Fortunately I was on a long road trip, so I was able to get through it in two day.s

Second book in the trilogy is as good as the first

The intriguing characters from the first novel (hormone-augmented Greg Mandel with his psi abilities, Julia Evans with her machine-augmented links to alternate personality cores) return to solve a very bizarre murder mystery with world-changing implications. Hamilton plays a bit fast and loose with the quantum mechanics hinted at in the title, but the story is so well told that it is easy to suspend disbelief. It's certainly a must read in order to get to the final novel in the trilogy.

What did you love best about A Quantum Murder?

Great twist at end! Great foundation for Peter's other books.

What was one of the most memorable moments of A Quantum Murder?

Would you listen to A Quantum Murder again? Why?

Unexpected twists in the story line.

Have you listened to any of Toby Longworth’s other performances before? How does this one compare?

Yes. He did great

Greg Mandel back at it again

The first book was an introduction to what Greg can do and the story was pretty good also, this time hes back helping Julia Evans again and some of his friends are back.

This time he is investigating a murder that's Quantum in nature if that makes sense at all, it appears as if the murder was done in the same manner as a famous killer that's been locked up for a while so he couldn't do it, right? - that's where it gets strange and there is no was you will guess what the outcome is, I was guessing all the time at what happened and was wrong most all of the time, what happens is pretty strange.

This is another product of the early 90's as it has some of the theories that were going around then and made them into facts possibly even correctly in some cases - there are parts about global warming with melting ice caps and a housing market crash which lately is sounding more real compared to the melting ice caps.

Nothing is wrong with these books its just not up to what I like about the later books by this author, Audible.com doesn't have the next trilogy he wrote "The Nights Dawn - Trilogy" but its really good and Pandora's Star and Judas Unchained which Audible.com does have are simply amazing.

If you liked the first book and want to see Greg, Julia, and friends tackle something else then this for you, as well as the next one