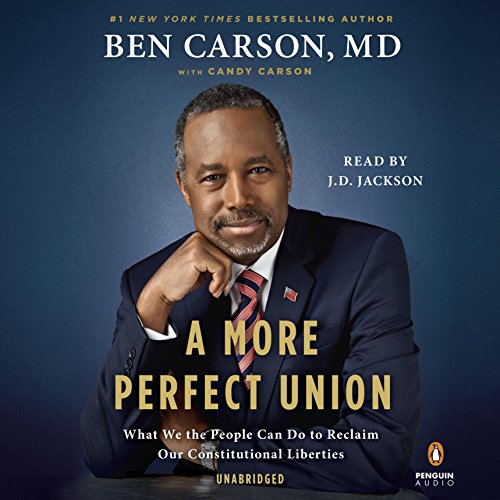 Many people have wondered why I've been speaking out on controversial issues for the last few years. They say I've never held political office. I'm not a constitutional scholar. I'm not even a lawyer. All I can say to that is "guilty as charged." It's true that I've never voted for a budget America could not afford. I've never raised anyone's taxes. And I've never promised a lobbyist anything in exchange for a donation.

Luckily none of that really matters. Our founding fathers didn't want a permanent governing class of professional politicians. They wanted a republic, in Lincoln's words, "of the people, by the people, and for the people". I believe that making a difference starts with understanding our amazing founding document, the US Constitution. And as someone who has performed brain surgery more than 15,000 times, I can assure you that the Constitution isn't brain surgery. The founders wrote it for ordinary men and women, in clear, precise, simple language.

I wrote this book to encourage every citizen to read and think about the Constitution and to help defend it from those who misinterpret and undermine it. In our age of political correctness, it's especially important to defend the Bill of Rights, which guarantees our freedom to speak, bear arms, practice our religion, and much more. The Constitution isn't history - it's about your life in America today. And defending it is about what kind of country our children and grandchildren will inherit.

I hope you'll enjoy learning about the fascinating ways that the founders established the greatest democracy in history - and the ways that recent presidents, congresses, and courts have threatened that democracy. As the Preamble says, the purpose of the Constitution is to create a more perfect union. My goal is to empower you to help protect that union and secure the blessings of liberty.

Excellent review of our founding document

I loved this book so much that I'm starting at the beginning and reading the whole book again. Also bought a copy for my sister. 5 stars because Ben and Candy Carson take our constitution and make it current and applicable to our lives today. LOVE THIS BOOK!

A must read for every American. Raymond J German

I am an attorney and have been practicing for 42 years. This book has done much to reaffirm why I became an attorney. Freedom, freedom, freedom. It is my desire that everything taught in this book be learned by everyone.

My husband and I listened to the audio version on our way home from vacation from D.C. To Florida. 6 hours flew by because we LOVED this book. The Constitution well explained. My only complaint is that Ben Carson wasn't the voice reading the book. The guy who did was great though. Carson has my vote for President.

I loved this book !

This book will be great for anyone who wants to know more about our constitution. I especially recommend it for liberals who have been taught to hate America and American ideals. In an age of false information about America's founding, this was a refreshing reminder of American ideals.

this book is just what America needs .Now we need a great President to lead

Would you listen to A More Perfect Union again? Why?

I would read it over again and again. Explains everything to detail.

II know now have knowledge of what the framers invisioned for America.

I thoroughly enjoyed this book. It's further proof to me that Ben Carson is the man that we should elect as president in the 2016 election. Anyone who has any interest in government, politics, or the future of our nation should spend a few hours reading this book.

This is a very technical written story but most informative. You must really want to change the way our country is going.

To Chang the direction our country is going this should be in every school system.
Freedom!

A wonderful review of our Constitution and how it mentored the philosophy of Dr Carson.