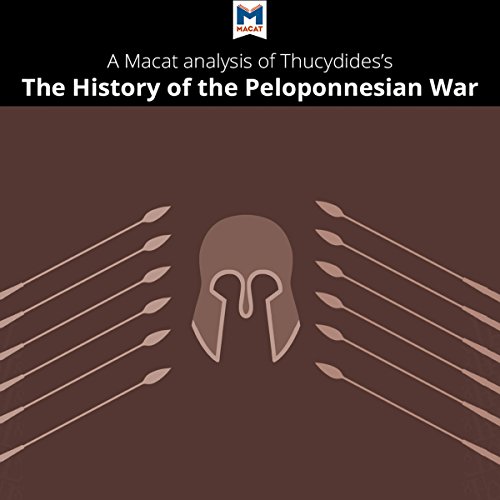 A Macat Analysis of Thucydides' History of the Peloponnesian War

Thucydides' History of the Peloponnesian War is generally acknowledged as the first great work in the fields of both history and political theory. It uses a combination of narrative, debate, and analysis to document the war between Athens and Sparta (431-404 BC). But the importance of the work lies less in the story than in the way Thucydides tells it. History was the first major work of political inquiry that did not relate events to divine influences. It introduced instead a critical method of looking to the facts of human actions as the basis of our understanding - a method that continues to be used today, more than two millennia later. Many of the most important political thinkers in the Western tradition cite Thucydides as an influence, and major figures including Thomas Hobbes, David Hume, and Friedrich Nietzsche have praised his writing.

This was a very weak synopsis

There's not much to work with. It's very very general. How much can you say in a 2 hr synopsis of Thucydides History of Peloponesian War? I can't imagine this audiobook to be very informative if you haven't read the actual book. And The reading was not very inspired and sounded mindless and hollow like a computer (similar to those of Alexa, or Google etc.). In or around chapter 12 the audio cuts to a different reader (male voice) reading a different book (Max Weber. It sounded kind of interesting). Overall I was not very impressed with this purchase and I would not recommend it unless it were free. 3/5 stars.