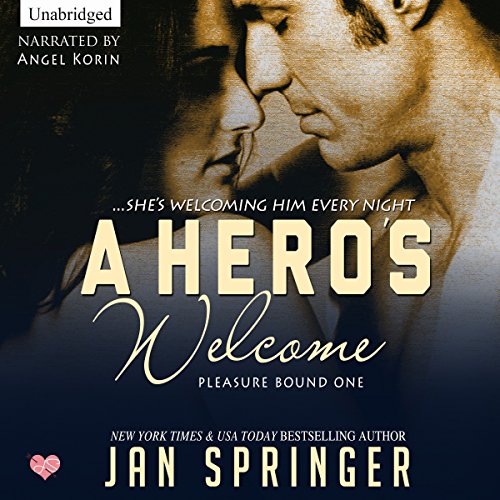 On the planet of Paradise, in the not-so-distant future, women rule and men are slaves. But three male astronauts and their three sisters are going to shake things up! Being injured and held captive isn't what astronaut Joe Hero had in mind when he agreed to explore a newly discovered planet for NASA. But a man would have to be dead not to fall for the sexy female doctor in charge of his care. One night of scorching passion in the arms of the stranger from another planet is enough to convince Annie that there's much more to males than she's been taught. Who is this sexy hunk and why does she feel like welcoming him into her bed every chance she gets?

A Hero's Welcome - Book One

Steamy sci-fi listen. Great story and characters. Great narrator too. I received a free review copy of this audiobook at my request and I have voluntarily left this review.

I loved this sexy story! So different from other books in this genre - this was a unique and well written steamy story and I can't wait for more in this series!

I was given this free review copy audiobook at my request and have voluntarily left this review. The fact that I was gifted this book had no influence over my opinion of it

A Hero's Welcome by Jan Springer was a great read. Women rule on the planet of Paradise. Joe Hero is an astronaut from the United States on a mission with his two brothers. I enjoyed reading Annie and Joe's story.

I'm still not sure what to think about this one...

It's beautifully written and on that basis it deserves 5 stars, but the setting is so disturbing that I found it hard to listen to. The world that this book is set on is run by women who have completely subjugated all men, they aren't allowed any education, they're not even taught to speak, they're considered little more than animals and they are used as sex slaves. I found all the non-consensual scenes really disturbing.

The central relationship has consent but everything else...

In other surroundings this would have been a really lovely romance.

The narrator did a good job, the character voices are clear and distinct, the delivery was a good match for what was happening at each point in the story.

I received a free copy of this book from the author and/or narrator and/or publisher in exchange for an honest review.

A love story that's out of this world

In a world where women rule - literally - things aren't as peachy as some feminists might imagine. It's an evil, dictatorial nightmare where all men are uneducated slaves, tortured and treated worse than animals. When three NASA astronauts crash land there, one of them has a rude awakening ahead of him.

This is a great fish out of water story while also incorporating some Romeo and Juliet forbidden love aspects, so all-around, it's an entertaining and engrossing story. There's no question that it's an open-minded, adult read due to plenty of explicit sexual content.

I loved every minute of this book. If I had one complaint, it's the title. She's Welcoming Him Every Night.....get it? Wink wink? There is no need for the euphemism. Also, the NASA astronaut's name is Joe Hero. It's a little heavy handed for my taste considering the title. To me, the title makes the book sound like a smutty, pure X-rated romp, and it's just NOT! It's so much more. It's got a great plot, excellent characters, great character arcs, realistic dialog...I mean, it's a real story, only with steamy sex scenes.

Overall, the story fell flat. It had potential to be a decent SciFi romance but it was not a compelling enough storyline. Trying to tie in sexy moments with action seemed awkward and confrontations didn't have the build up to make it believable. The narrator did a nice job but this story is a very pale attempt to blend steamy romance with shades of Logan's Run and a Brave New World.