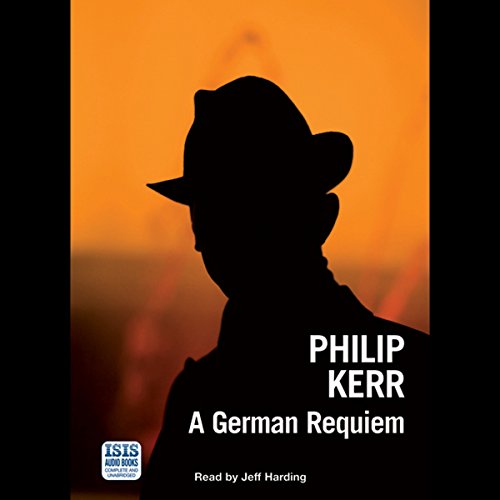 Bernie Gunther had his first brush with evil as a policeman in 1930s Berlin and came to know it intimately as a private eye under the Nazis, when each case drew him deeper into the enormities of the regime.

Now the war is over and Gunther is in Vienna, trying to clear an old friend of the murder of an American officer. Amid decaying imperial splendour, he traces sprials of depravity that lead him to a former head of the Gestapo.

This was my first audiobook and I'm still struggling with the idea that a stranger imposes on my imagination. This may tint my review.I did like the description of post-war Berlin, it seems rather authentic and makes a really special setting for the story. And the pitch of a German ex chief superintendent working in the post-war confusion is really interesting! Alas, to me, that's it. The characters are rather banal, the women are all obnoxious, and the main charakter is a Los Angeles private eye from the early 60ies lost in the wrong plot. I was convinced that this book was written in the 50ies by some American too far away to be bothered: I would have excused the triteness and the sexism as being testament to those times. But no, the author is a contemporary Scotsman, and apparently he even got awards for his books. I feel that the book is the equivalent of an early James Bond movie: I understand why people could like them and consider them being pop culture, but I just think they're antiquated and bloody stupid.

Would you be willing to try another book from Philip Kerr? Why or why not?

No. I'll leave these to people that like old James Bond movies. But I'll try a John Le Carré.

Now there's maybe a reason why I couldn't hook up with the book: the narrator. He must have been chosen with care, and I imagine the reasons: he has this deep, manly voice (the lead is a deep, manly man), speaks a very broad American English (Berlin Noir - L.A. Noir, get it?) and he can do accents really well (all foreigners have awfully thick accents, as everybody knows, and in this case, even the locals do, because Germans speak English with a German accent, except the German lead, who speaks English with an American accent, go figure). And those are exactly the reasons I don't like it. I'm not 5 years old, I don't need a narrator to do voices! When I first heard his impression of a Russian soldier, I was simply irritated, when it came to the lead's wife, I had to laugh out loud, it was ridiculous. Again, maybe some people like this kind of taletelling, I prefer a professional narrator (not a manqué actor!) to stay neutral, in the background and not construe the author's words.I still give 4 stars for the performance, because after all the narrator did deliver what I guess he was asked for.

Was A German Requiem worth the listening time?

I don't know if I will finish it. I'll try since I paid.

If anyone can recommend good narrators...?

This could have been a good listen but for the fact that the narrator who was supposed to be German had an American accnet which reminds one of the Micky Spillane radio series. Yet the narrator showed that he was quite capable of sounding like German accented English. This spoiled it for me.