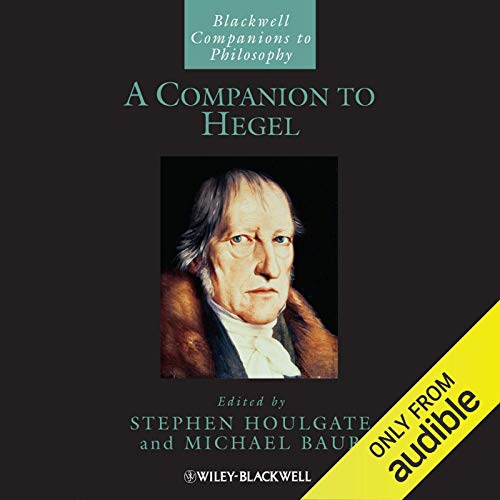 A Companion to Hegel

p>G.W.F. Hegel (1770–1831) is one of the most important and sophisticated modern thinkers, but only now are his substantial contributions to metaphysics, epistemology, political philosophy, aesthetics, philosophy of history, and philosophy of religion gaining the recognition they deserve. This companion is the first collection of essays to do justice to the extraordinary richness and diversity of Hegel's philosophy. Specially commissioned essays from international scholars cover all the main areas of Hegel's mature thought, as well as his influence on significant thinkers, such as Heidegger, Adorno, Derrida, and McDowell. More than just an overview of Hegel's work, the essays in this volume draw on the most up–to–date research to offer new perspectives on his thought. With insights for students and specialists alike, A Companion to Hegel provides a valuable understanding of the work of a subtle and challenging philosopher of the natural and the human world.

Stephen Houlgate is Professor of Philosophy at the University of Warwick. He is the author of Hegel, Nietzsche and the Criticism of Metaphysics (1986), An Introduction to Hegel: Freedom, Truth and History (1991, 2005) and The Opening of Hegel’s Logic: From Being to Infinity (2006), and his edited volumes include Hegel and the Philosophy of Nature (1998), The Hegel Reader (1998), and G.W.F. Hegel: Outlines of the Philosophy of Right (2008). He has served as Vice President and President of the Hegel Society of America and is a former editor of the Bulletin of the Hegel Society of Great Britain . Michael Baur is Associate Professor of Philosophy at Fordham University in New York City, and Adjunct Professor of Law at Fordham Law School. He is Secretary of the Hegel Society of America and has published widely on phenomenology, critical theory, philosophy of law, and nineteenth–century continental philosophy, and on thinkers including Kant, Fichte, Hegel, Aristotle, and Aquinas.

“Comprising well written essays by internationally acclaimed Hegel scholars (although many are from North America), this volume makes an excellent and accessible reference both to scholars and students of Hegel and Hegelianism.” (Religious Studies Review)
"This superb study brings together Hegel scholars who have penned uniformly excellent articles on all aspects of Hegel's career ... Summing Up: Highly recommended. Lower–division undergraduates through researchers/faculty." (Choice)

A very coherent set of essays

I love Hegel. I only discovered him last year when I had stumbled upon his Phenomenology quite by accident where on a whim I decided to listen to the three minute snippet for which Audible had provided. I was hooked.

This volume is incredibly listenable. I thank audible for providing it. Each of the thirty chapters are written by scholars for students.

I would never entertain undertaking 'a companion to' any other philosopher but Hegel. Often it seems as if he writes like James Joyce did with "Finnigans Wake", but the thing to realize is that no matter how complex the sentence seems because of the odd use of the words that compile them there is always a meaning that can be extracted. It just has to be found.

These authors of the independent essays step you through beautifully by what they think Hegel really was getting at. For me, the key is to realize that Hegel is talking about how thought leads to thinking and the concrete is what he's getting to only at the end of his philosophical musings. I felt like this volume was like taking a whole Junior year level worth of courses in philosophy because in the guise of talking about what Hegel thought about the topic all of the major topics within philosophy are discussed so that the listener understands every major area that would be included in a year of advanced philosophy courses.

There is a reason I really have enjoyed reading Hegel and about what people say about what he is saying. At the heart of what he's getting at is usually one of four things, a) the start of consciousness within the individual (the 'I/we' within us), b) the relation of the self to the other (the 'I/we' between us, c) the other in relation to the whole and d) the relation that being, becoming and nothing have to each other. In other words, Hegel explains in understandable but abstract language the here, the now, and the I and how the I is the we and the we is the I and the other is as important as the self from within ourselves, between ourselves, and within society throughout history.

The fourth item, 'd' is covered mostly by Hegel within his book, "Science of Logic". I had read it last year and thus previously to having had listen to this Companion. Sometimes, I had wished that I had read that book after having had listened to these essays. They did such a good job at elucidating what Hegel was really trying to say in his Logic that I would have gotten more out of the experience by reading the Logic after having listened to this book.

I found all the chapters edifying. I was always grateful when they ended because just one more item on the topic would have seem to have been one topic too many, but they all seemed to have ended before they caused an overload.

The real point I'm trying to make is that this series of essays really worked together. The authors never snuck in arcane philosophical words or terms, and if they did they would explain what they meant, and if I started not to understand something within an essay it would end up being re discussed latter in another essay clearing up any difficulty I might have had earlier.

This companion goes way beyond just Hegel and ties together many diverse topics within Philosophy thus making it one of the best text on Philosophy I've come across.

First, any review of a 35-hour audio tome of essays on Hegel will be tempered by misgivings about the mental state of anyone who would actually purchase such a thing. An obscurantist dialectician with way too much time on his hands? Who can trust such a reviewer?

What can I say? The title doesn't lie. You know what you are getting. You either are a Hegelian or you are not a Hegelian--unless, of course, you are a Hegelian, in which case you are both.

As a matter of fact, I was delighted to find that these essays are relatively clear, quite diverse, and nicely comprehensive. The editor Stephen Houlgate is one of the best and most lucid of contemporary Hegel scholars. The works, so far, are clearer than one might expect, (though I have only started, and have a long ways to go before I approach the Judith Butler essay at the very end, where editor-defying syntactical horrors undoubtedly await).

The reading is clear, well-paced, and manly, seemingly sturdy enough for the 35-hour march. Though to differentiate the Hegel quotes the reader does toss in a German accent that to my ear sounds a bit odd. Of course, there are no recordings of Hegel himself, so perhaps he really did sound like Gandhi attempting Yiddish. (Though if he had, I suspect Schelling would have noted that for posterity.)

And then there are the publishers! It it is really very admirable that they would actually produce such an audiobook for the three individuals in the world who might be enticed to purchase it. A noble work. But...!

But why no chapter titles and a mismatch between the book chapters and the audio chapters, which renumber with each audio "part." So you have 35 essays and no way to find them by title or even by counting. Why do so many publishers do this? I mean, here we are with Google glasses and 3D printers. Is it really so hard just to divide and label the digital chapters? Am I missing something?

One of Hegel's contemporaries, I forget who, explained Hegel by noting that he was a Schwabian and Schwabians hate to be understood. Evidently his audio publishers are Schwabians as well. Aside from that, if you actually want to hear some good, clear Hegel commentaries--in shuffle mode--next time you're out jogging, this is the audiobook you've been waiting for!

Incredibly Helpful, though Not for Beginners

This is an amazing collection of essays from some the greatest Hegel scholars. The essays tackle lots of important issues from each of Hegel's major works and then many essays compares him to other important philosophers who have engaged with him.

The breadth of issues discussed may not make this the best introduction for a total beginner, but this kind of material will engage someone somewhat familiar with Hegel with many important questions surrounding his philosophy. Hope we see many more audiobooks like this for people who are interested in being able to study philosophy in depth by audio. I'll definitely be consulting he audiobook a lot as I study Hegel.

Would you consider the audio edition of A Companion to Hegel to be better than the print version?

Why do you have readers who do not speak German reading a book about Hegel?The terrible German pronunciation is VERY distracting. This is not Hogan's Heroes. Cartoonish accents are not needed.This is a very interesting and valuable book. Please take care in the future to hire readers who have a working knowledge of the German language. Why is this so difficult? "Sache" in German should not sound like Satcher. Wow. Really? This is simple stuff guys. And BTW, telling the reader about the differences in English and German consonants such as V and W would go a long way to making this audio book better. And then there are the vowels. Hearing a German word is enough to be able to spell it. "sein" and "sehen" are pronounced differently. It's not rocket science.Fortunately, the early chapter by Houlgate on the P of S is worth the whole book price. Please continue to add titles from Houlgate to the Audible collection. Consulting with the author would be a great step to add to the production process.

What other book might you compare A Companion to Hegel to and why?

Try to convince me that these are actually the pronunciations of an early 19th C. Stuttgarter/Prussian scholar. Good luck with that.

Where does A Companion to Hegel rank among all the audiobooks you’ve listened to so far?

I've only listened to one and a half hours or so, so impossiblle to say.

What was one of the most memorable moments of A Companion to Hegel?

The reader's pronunciation of 'Hegel', which comes across at times as 'Higgle' and 'Heggle'. Feuerbach sounds like 'fruaback', 'Fichte' as 'fictay', makes listening to the book a cringe worthy experience. 'Erbach' sounds like 'uhhhr-back'. Pronunciation of a word like 'Wirklichkeit' is so mangled, it sounds as if the reader has swallowed his tongue. And more often than not, the reader puts the stress on the wrong part of the word.

I don't wish to be mean, but couldn't the publisher or recording producer have shelled out a few bucks on a competent German-language coach. Come on folks, this isn't good enough. Where's your quality assurance?

Excellent Analysis of all of Hegel's Work

I would recommend this book for the intermediate and advanced Hegel student. It covers up to date analyses on all of Hegel's major works. Those new to Hegel should start elsewhere. I found the sections on his philosophy of history, aesthetics, and religion to be very interesting and helped my understanding a great deal.