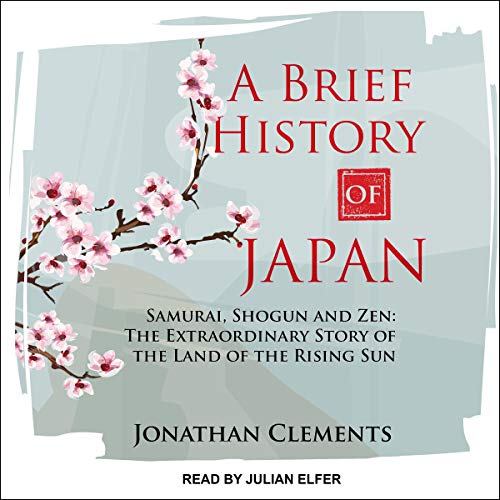 A Brief History of Japan

This fascinating history tells the story of the people of Japan, from ancient teenage priest-queens to teeming hordes of salarymen, a nation that once sought to conquer China, yet also shut itself away for two centuries in self-imposed seclusion.

First revealed to Westerners in the chronicles of Marco Polo, Japan was a legendary faraway land defended by a fearsome Kamikaze storm and ruled by a divine sovereign. It was the terminus of the Silk Road, the furthest end of the known world, a fertile source of inspiration for European artists, and an enduring symbol of the mysterious East. In recent times, it has become a powerhouse of global industry, a nexus of popular culture, and a harbinger of post-industrial decline.

With intelligence and wit, author Jonathan Clements blends documentary and storytelling styles to connect the past, present, and future of Japan, and in broad yet detailed strokes reveals a country of paradoxes: a modern nation steeped in ancient traditions; a democracy with an emperor as head of state; a famously safe society built on 108 volcanoes resting on the world's most active earthquake zone; a fast-paced urban and technologically advanced country whose land consists predominantly of mountains and forests.

A Brief Review of the Book

So this book is good just very short. It tells you in the title (and the hour count) that it's gonna be short but I wish it were longer. The information in this book if they really dug deep into the history could be a 20+ hour long book. I've taken Japanese history classes and this book went over everything I've learned in the classes with just a few tidbits I didn't know beforehand. So if all you're wanting is a 'Brief History' then this book is perfect for you. If you want to learn more afterward there's a youtube channel called Linfamy that has a many episodes long history of Japan series that goes into much greater detail.

An excellent introduction to the subject.

Well written, and well read, this book serves as an excellent introduction to the subject of Japanese history and culture. I recommend it if you are in a hurry to get some knowledge under your belt, and then begin to dig deeper.

The author presents no false pretense in regards to the academic merit of this work, as it was written to generally inform and entertain. Within this context, this is an interesting book that presents a colorful array of Japanese history and culture. Despite this, the author often presents over-simplifications for the sake of brevity that threaten to fundamentally weaken key components of the narrative. Some incidents, such as horrific systematic war crimes are simply too important to vaguely allude to in passing.

As usual Johnathan Clemons brings his own personal brand of humor to a subject that could get bogged down in difficult to follow facts and dates. The narrator does a great job of never letting the narrative get too boring to follow.

it was a good introduction to Japanese history. I was looking to get some insight into the Samuria's role in Japanese history and didblewrn a little, but wasn't the focus.

First book I've finished in a long time! i think i now have a newfound passion for history!

It's difficult to by to a short history, but the author pulls it off from the earliest myths to modern culture and politics. The reader is engaging and pronounces Japanese words correctly. I highly recommend this book and audio for anyone looking for a quick primer on Japanese history.