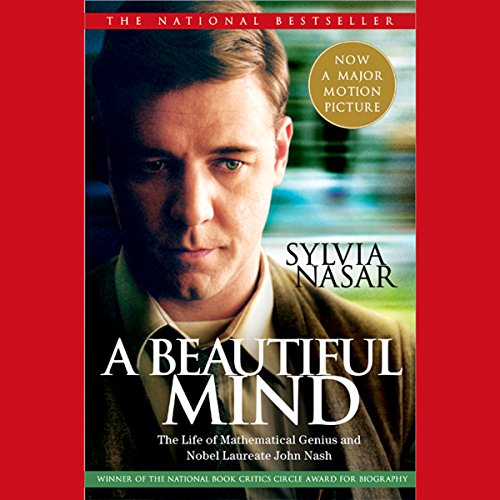 "How could you, a mathematician, believe that extraterrestrials were sending you messages?" the visitor from Harvard asked the West Virginian with the movie-star looks and Olympian manner.

"Because the ideas I had about supernatural beings came to me the same way my mathematical ideas did," came the answer. "So I took them seriously."

Thus begins the true story of John Nash, the mathematical genius who was a legend by age 30, when he slipped into madness. Thanks to the selflessness of a beautiful woman and the loyalty of the mathematics community, he emerged after decades of ghostlike existence to win a Nobel Prize and world acclaim. The inspiration for a new motion picture starring Russell Crowe, Sylvia Nasar's award-winning biography is a drama about the mystery of the human mind, triumph over incredible adversity, and the healing power of love.

"[This biography] could plausibly be described as a three-handkerchief read." ( Wall Street Journal)
"Rarely has the fragility of the boundary separating genius from madness been illustrated with more compelling insight." ( Booklist)

One of the other reviewers stated that she wished she had waited for the unabridged version of Sylvia Nasar's book.

I listened to this version and had the very same thoughts. What a great story, it provides a different perspective than the movie and if you liked the movie, you will likely not be feeling that the book is a "repeat."

So - when the unabridged version appeared, I picked it up as well. WHAT A DISAPPOINTMENT.

Anna Fields is the narrator of the unabridged version and she made me realize what an impact the reader makes on a book. Sorry to say, but this narration (unabridged) cannot hold a candle to the superb job Edward Herrmann does for the abridged version.

It might be unfair to compare anyone to one of the best in the business (Herrmann), but this is a great example of how important it is to match the narrator to the book.

So - before you go for the unabridged version, try the samples for both and see if you agree that of the two versions, the narration by Edward Herrmann is absolutely stellar!

More real than the movie

Made Nash a real person. Not as romantic but genuine.

Having heard nothing about John Nash outside of the movie based on this book, listening to <U>A Beautiful Mind</U> proved to be an even better story about John Nash's amazing life for its realism and its lingering tragedy. Listening to this book, you understand how truly amazing Alicia was for "staying" with Nash. You learn the tragedy of their son's life.

It seems his whole story is told, thoroughly.

I'm not an expert though. I've not further studied nor verified all of the details.

It isn't like the movie, but is a good story if you can hang for it.

The biography itself is written in a compelling style. The narration of this audiobook is clear and engaging. Highly recommended!

What did you love best about A Beautiful Mind?

Probably it's honest and accurate telling of the story about John Nash.

What was one of the most memorable moments of A Beautiful Mind?

John Nash's numerically about names are numbers in a base 26 number system.

Have you listened to any of Edward Herrmann’s other performances before? How does this one compare?

I haven't listened to any of Edward Herrmann's performances before.

No I listen to this book in many sitting.

I loved the movie so I thought the book would be as good. NOPE! The movie brings out the human side to Nash. This book brings a statistically view of him. It is very choppy and has no flow to it.

Rent the movie, pop some popcorn and enjoy.

An interesting book but information was too detailed to follow if you listen to books while driving.

Hermann has a wonderful voice, but I felt that this book does not come across well in audio. It has many short choppy sentences, and the main character is referred to as "Nash" over and over again. After listening for maybe three or four hours I realized this guy is a real "jerk". It bothered me that he had no remorse for some of the things he did, supposedly while sane. This is not a feel-good story.