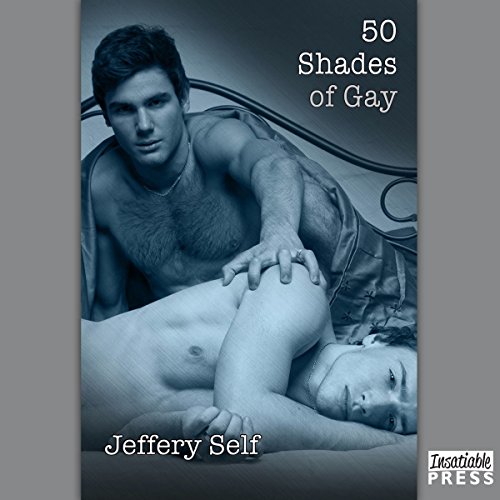 Meeting his celebrity crush was one thing, but even Hollywood could not have written what happened next. Inspired by E.L. James’ international phenomenon, 50 Shades of Grey, Jeffery Self’s 50 Shades of Gay tells the story of a young celebrity blogger, Alex Kirby, who interviews Taylor Grayson, a superstar leading man in Hollywood blockbuster films. Grayson also happens to be a closeted gay man with a passion for BDSM. When Grayson draws the younger man into his private orbit and initiates him into his sexual world, the younger man can tell that kinky sex has shielded Grayson from having a real emotional connection with another man. But he is head-over-heels in love with the older, powerful, gorgeous man who has selected him for the pleasures of submission. Ultimately, Alex decides to experiment with the power differential between them, and see if he can break through the armor that Grayson and his layers of Hollywood handlers have imprisoned him in. Will he be able to open Grayson up to real intimacy, or will he cause Grayson to end the relationship and cut himself off yet again?

Narrator was good but the story was average. better than the original but needed to have have of a story plot added and greater detail in the sexual experiences.

So crazy funny, I've never laughed so hard during an audiobook.

I was looking for another book narrated by Iggy Toma and this one came up. I do think the price is to high for what it is. The book is over priced too.

If you haven't read FSOG, I still think you'd like this book and think it was quite funny.

Iggy Toma did an amazing job as always.

Almost a parody of FSOG with a movie star.

Where does 50 Shades of Gay rank among all the audiobooks you’ve listened to so far?

I've listened to many and this one was very entertaining. The characters were well developed especially with the help of Iggy. He is an amazing narrator. I look forward to more from him.

What was one of the most memorable moments of 50 Shades of Gay?

As with most, it was the Come to Jesus moment towards the end. Out and Proud! That is what we see right now for people who are still ashamed.

What does Iggy Toma bring to the story that you wouldn’t experience if you just read the book?

Absolutely. I actually purchased this book because Iggy was the narrator.

I was hesitant about this title, concerned it may be kind of “cheesy”, not the case though. Great story, leaves you wishing there was more. Narration was great as well.

This is an excellent adaptation of the originally straight novel, Fifty Shades of Gray. The voices in the vocal performances enhance the story, which is funny, HOT, at times, and very contemporary. It’s is a great light read about the gay Hollywood scene of young guys just coming out to express and live as they truly are inside. ****

Great but could have been longer

Although the storyline was great i felt that it was kinda rushed at the end.

Hey, I am as down with a good gay-romance as the next guy, but this turd is complete & utter rubbish. SO unbelievable, SO lame, SO painful to listen to.
I had to fight back the gagging after three chapters, and finally tossed this doozey after the fourth chapter.
Do yourself a favour and pass on this trash.

more details of the ending

I would have liked a better ending it seemed rushed. maybe more of how they ended up