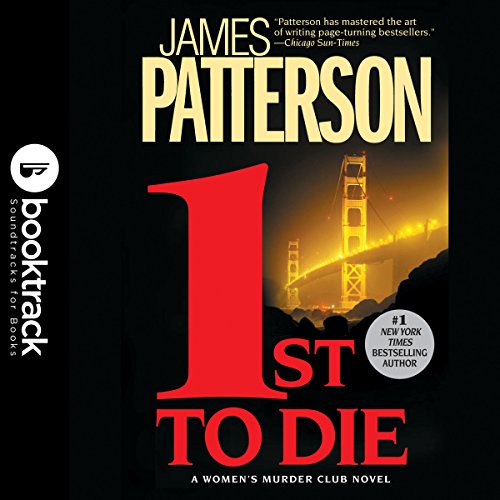 1st to Die adds an immersive musical soundtrack to your audiobook listening experience!*

Booktrack editions are essentially a new genre of digital storytelling entertainment.  Music and ambient audio are added to complement and enhance the audiobook experience. It is a synchronized movie-style soundtrack that complements the narration of existing audiobooks; the tempo and rhythm of the score harmonize with action, dialogue and the characters' emotional arcs.

Imagine a killer who thinks, What is the worst thing anyone has ever done? - and then goes far beyond it. Now imagine four women - a police detective, an assistant DA, a reporter, and a medical examiner - who join forces as they sidestep their bosses to track down criminals.

Known as the Women's Murder Club, they are pursuing a murderer whose twisted imagination has stunned an entire city. Their chief suspect is a socially prominent writer, but the men in charge won't touch him. On the trail of the most terrifying and unexpected killer ever, they discover a shocking surprise that turns everything about the case upside down.

"A clever plot with enough last-minute revelations to keep you guessing." (Entertainment Weekly)

"Patterson again proves himself a master of the craft... Such a great book: every time you think you've got it all figured out, you realize the killer is still a step ahead." (Providence Sunday Journal)

I have been enjoying the murder club series. It’s great to hear again how they all got together. I enjoy books and movies that portray women as feminine and strong, intelligent and effective. This book was a fun read. I particularly appreciate the plot twist at the end. Well done!

a little something for all my passions all in one

This is the first book of a 17 book love affair. It has every thing I need to fulfill all my desires for a great book all in one. It has mystery, romance, a tear jerker, a page turner, a loveable smart heroine. I could go and on. I have listened to four of the books within a week and anticipate finishing the entire 17 book series within the next two and a half weeks or less if posible. .I LOVE ANYTHING WRITTEN BY JAMES PATTERSON!!! Haven't gotten into the murder club yet? Please join NOW!! You wont be disappointed.

the music in the background is really distracting and gives me a headache. I'm only on chapter 4 and the story is promising but I dont think I can finish the book if the whole thing is going to have background music. it's a shame.

A great mystery book! It really kept me on my toes! The writing was well-paced, and the synergy of the narrator and background music really brought the story to life, as if I could see the scenes playing before my eyes! I would definitely recommend this!

Loved Suzanne narration, drew me into the story. Strangely enough the soundtrack also pulled me in. More soundtracks please! Patterson is the master of suspense.

Background music is annoying and distracting

Background music is annoying and distracting! Ugh! Good story, but I can't listen with the music!

the storyline is excellent, but I found the music to be extremely distracting and overpowering at times. The narrator does a good job, but sometimes her voice is so low it's very difficult to hear.

another patterson series worthy of delving into.
well spoken. well acted. kept your attention. full of twists all along the way.